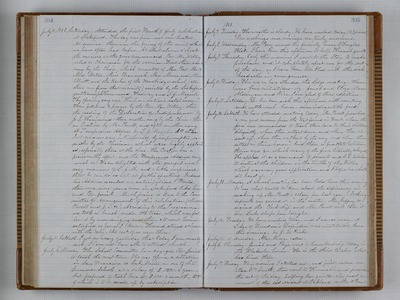 July 4. 1868. Saturday. Attended the first Fourth of July celebration at Lockeford. The day was fine-not over-heated. At sunrise, there was the firing of the anvil, which we have often had before. At about eleven o'clock the exercises at the grove commenced. Rev. Mr. Willey acted as Chairman for the occasion. First, there was a song by the choir, which consisted of Mrs. Post. Mr. & Mrs. Norton, Miss Brannock, Mrs. Morse and Miss Elliott, and the teacher of the Woodbridge school, (all there are from that vicinity) assisted by the Lockeford gentlemen J. S. Hammond, Tredway and L. J. Megerle. The opening song was. "Hail, our nation's natal morn." Then followed a prayer by the Rev. Mr. Willey then the reading of the “Declaration of Independence" by J. S. Hammond - then another song by the Choir- then an Oration by Mr. Powell, and after another song a Temperance Address by L. J. Megerle. All three last exercise were interspersed by impromptu remarks by the Chairman, which were highly applauded, especially those at the close. The Oration was a praiseworthy effort, and the Temperance Address very much so. We are delighted with the graceful and easy manners of L. J. M. and a little surprised that he can do so well at public speaking. Indeed, his Address exceeded our anticipations. Would there were more young men in Lockeford like him and Bro. Josiah. Much praise is due to the Committee of Arrangements of this celebration. (Messrs Powell and J. S. H.). According to the Programme we took a lunch under the trees, which was followed by more singing and then all went home satisfied as far as I know. Howard stayed at home with the baby the rest of us were there. July 5. Sabbath. I got so weary yesterday that today I am nearly sick. I have not been able to attend church. July 6. Monday. The School Committee have engaged Bro. Josiah to teach the next term. He was offered a situation in San Francisco as Sub-Master in one of the Grammar Schools, at a salary of $1200 a year, but preferred to teach here at $100 a month, $ 25. of which is to be made up by subscription. 1868. July 7. Tuesday. The weather is cloudy. We have washed today 129 pieces. Our washings and ironings are truly enormous. July 8. Wednesday. Mr. Perry moved his family home to Douglas Flat. I have been this afternoon to help Hannah quilt. July 9. Thursday. Early this morning I went to the Store to make purchases, and it completely upset me for the rest of the day, as I have been troubled with the sick headache in consequence. July 10. Friday. This eve we have attended the Lodge meeting. There were four initiations viz. Josiah and Eliza - Messrs Alderman and Rice. I am glad of these additions. July 11. Saturday. Dr. has been sick this afternoon with vomiting and nettle rash. Cause some indigestible food. July 12. Sabbath. We have attended meeting today. Mr. Powell preached a very good sermon from the text found in Dent where the Jews were commanded to teach their laws to their children "diligently, when thou sittest down and when thou resestup, when thou walkest by the way, and when thousittest in thine house bind them as frontlets between "thine eyes, etc. which many of the Jews literally obeyed He applied it as a command to parents and S.S teacher to instruct the children in the truths of the Bible. which was a very good application, and I hope we shall all heed it. July 13. Monday. A church meeting has been held here this evening to see what could be done about the deficiency in making up Mr. Powell's salary for last year. Nothing definite was arrived at in the matter. Mr. Geffroy resigned the Clerk ship, and Mr. Powell will take it Geo. Locke sleeps here tonight. July 14. Tuesday. We have washed today, and I am so weary. A Lodge of "Freedom's Defenders" was instituted here this evening, by J. W. Ricks. July 15. Wednesday. Mrs. Brown called July 16. Thursday. Josiah and Eliza went to housekeeping today in the Blakeslee house. He is the third teacher who has lived there. July 17. Friday. This morning I started out, and first called on Mrs. Wm. Smith, then went to Hannah's and passed the rest of the day helping her quilt, also lead an account of the sad accident at Oakland on the 4th inst.