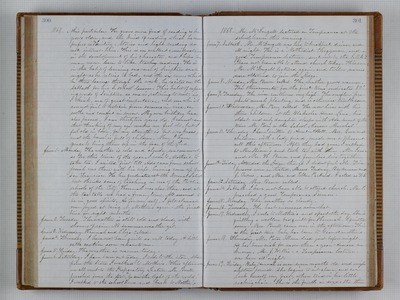 1868. this particular. He grows more fond of reading as he grows older, and the kind of reading which he now prefers is History. Stories and light reading do not interest him. This is an excellent consideration in the development of his character, and I hope he may never learn to like trashy reading. He is in the habit of learning one verse of Scripture each night as he retries to bed, and the six verses which he thus learns through the week, he recites on the Sabbath for his S. school lesson. This habit of repeating words of Scripture as one is retiring to rest, is, I think, one of great importance, and one which cannot fail to restrain from excesses in vice, or soothe and comfort in sorrow. My own birthday has also passed. I am thirty two years old. I cannot say that thinking of my age makes me feel old, but I feel old in body, for my strength is but weakness, and the house is full of children. May I have grace to bring them up in the fear of the Lord. June 1. Monday. The weather is cold and cloudy, uncommonly so for this time of the year. I rode to Mother's to take tea. I waited first till Ada came from school. Josiah was there with his wife, having come up from San Francisco. He has graduated at the Normal School but thinks some of teaching in one of the Public schools of the City. Hannah was also there, and at the tea table we had a funny time. All seemed to be in good spirits. As for myself, I felt almost over-joyed at being at Mother's again the first time for eight months. June 2. Tuesday. The weather is still cold and cloudy with showers of rain. No summer weather yet. June 3. Wednesday. Hannah and Eliza called. June 4. Thursday. I have not been quite so well today. A little extra exertion soon exhausts me. June 5. Friday. The weather is warmer today. June 6. Saturday. I have been out today. I rode to the store, then from the Store I walked to Mother's. This afternoon we all went to the Preparatory Lecture. Mr. Powell preached from the text, "Grace the light of the world." I walked to the school house and back to Mother's. Mr. McDougall lectured on Temperance at the school house this evening. June 7. Sabbath. Mr. McDougall was here to breakfast, dinner and all night. He is a Methodist Clergyman, and a good Temperance lecturer, sent out by the I. O. G. T. I have not been able to attend church today. This eve Mr. McDougall lectured again, and twelve names were obtained to join the Lodge. June 8. Monday. Mrs. Brown called. The weather grows warmer. The thermometer for the first time indicates 80º. June 9. Tuesday. The river continues very high. The overflow prevents much planting, and is otherwise trouble some. June 10. Wednesday. Mr. Perry called. He now lives with his three children at the Blakeslee House. Lena, his oldest and only daughter, sleeps with Ada most of the time Mr. Perry is the School Census Marshal. June 11. Thursday. I have written to Aunt Abbott. Mrs. Gove and children with a lady friend, made me a pleasant call this afternoon. After they had gone, I walked to Mrs. Brown's and took tea with them. Mr. Isaac and Mr. H. Brown and families live together. June 12. Friday. Attended the Lodge, though I didn't feel able. Five persons were initiated, Messrs. Tredway, Brakeman and J. Owens, and Mrs. and Ellen Packard. I acted as F. s. June 13. Saturday. Mrs. Brown called. June 14. Sabbath. I have not been able to attend church, Mr. P. preached a good Temperance Sermon. June 15. Monday. The weather is cloudy. June 16. Tuesday. The heat increases some what. June 17. Wednesday. I rode to Mother's and spent the day. She is quitting a woollen bed quilt for Hannah. I quilted some. Mrs. Powell came over in the afternoon. This is the first time baby has been to Grandmother's. June 18. Thursday. Mr. Peter Moore died just before night. He has been sick for more than a year disease unknown. Mr. J. W. Rix - a Temperance lecturer. was here all night. June 19. Friday. Baby Hannah is now seven months old and weighs eighteen pounds. She begins to sit alone, and can sock herself very fast, when tied in her little rocking chair. She is the fourth in size the three