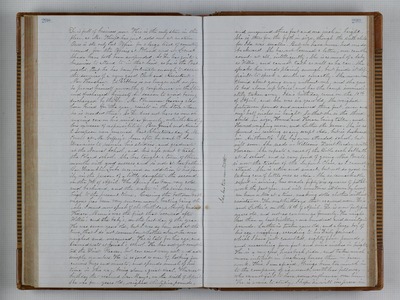 Dr. is full of business now. His is the only store in the place, as Mr. Thirft has just sold out at auction. Ours is the only Post Office for a large tract of country around, for the Offices at Poland and at Locust Shade have both been suspended. So Dr. has quite a business to attend to in that hire, as he is the Post master. But he has been fortunate enough to secure the services of a very good Clerk and Assistant. Mr. Henshaw. Ed. Gibbons is no longer with us, for he proved himself unworthy of confidence in the Store and discharged himself in reason to avoid being discharged by the Dr. Mr. Plummer having also been hired for the year, assists in the Store when he is needed there. So Dr. does not have as much anxious care on his mind as formerly, notwithstanding his increase of responsibility. Bro. Josiah and Annie E. Simpson were married last Christmas day by Mr. Powell at Mr. Geffroy's. Soon after he went to San Francisco to resume his studies, and graduate at the Normal School, and his wife went to teach the Poland school. She has taught a term of three months with good success and is now at her father's Bro. Franklin Locke received an addition to his family in the person of a little daughter the second on the 7th of April. The Spring has been very cold and backward, and the water in the river very high to the present time, Crossing the bottom with wagons has been very uncommon, boating being the rule. I must now speak of the birthdays, briefly indeed Horace Mann’s was the first that occurred after Willie's and the baby's, on the last day of the year. He was seven years old, but I was so very sick at the time that I do not remember whether or not he was weighed and measured. He is tall for his age, and learned well at Josiah's school. He has not yet completed the First Reader, but can count very well and add simple numbers. He is as fond as ever of looking for curious bugs and insects, and spends much of his time in this way, being alone a great deal. The next birthday that occurred was Mary's, on the sixth of April. She was four years old, weighed thirtyfive pounds, and measured three feet and one inch in height. She is there fore the fifth in size, though the sixth child for Ida was smaller. But we have never had one so backward. She has not learned a letter, nor can she count at all, intelligently. She is as much of a baby as Willie, and cannot talk as well as he can. She speaks her words plainly enough, but finds it difficult to speak a sentence correctly. She never was timid about going away without me, and she goes to bed alone up stairs, and has the lamp immediately taken away. Ida's birthday came on the 10th of April, and she was six years old. She weighed fortyseven pounds and measured three feet, seven and one-half inches in height. So that she is the third child in size. Howard and Horace being taller, and Howard weighing more, and Luther the same. She is as forward in reading as any except Ada, but is backward in Arithmetic. She has never attended school, but will soon. She reads in Willson's First Reader with Horace. She repeats a verse of the Bible each Sabbath at S. school, and is very fond of going. Mrs. Powell is now the teacher of the Infant Class, as I cannot attend. She is active and smart, but not so good in taking care of little ones as Ada. She is remarkably expert in sewing, has made fiftysix squares of patch work the past year, and will sometimes sit down by herself an hour or two at a time, making doll's clothes without assistance. Ida has two new teeth. The next birthdays that occurred were Dr.'s and Luther's, on the 16th of April. Dr. is now forty five years old, and not so care worn as formerly. He weighs less than on last birthday one hundred and seventynine pounds. Luther is twelve years old, and a large boy of his age weighing, according to his Daily Journal, which I have just consulted, eighty four pounds, and measuring four feet and nine inches in height He is a very good horseback rider, and takes much more interest in breaking horses than in farm work. This, I am afraid, brings him too much in to the company of ignorant, worthless fellows, who cannot fail to have some influence over him. He is averse to study, I hope he will improve in