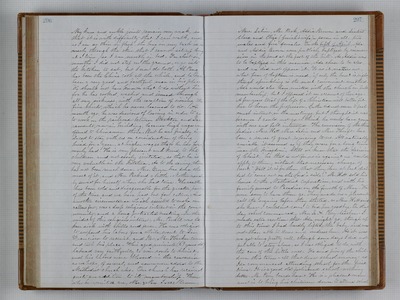 My knee and ankle joints remain very weak, so that it is with difficulty that I can walk, and as I am so thin in flesh, the bone in my back is so nearly through the skin that I cannot sit up long at a time, so I am mostly in bed. For about six months I did not step on the ground, or go into the kitchen to eat, but I now do both. Ah Peng has been the China cook all the while, and he has been a very good and faithful man in his place. We should not have known what to do without him for he has cooked, washed and ironed through all my sickness, with the exception of ironing the fine shirts, which he never learned to do. A month ago, he was desirous of leaving in order to go to work on the railroad between Stockton and Sacramento, now in building, because high wages were offered to Chinamen there. But he was finally induced to stay with us on consideration of being hired for a year, at higher wages that he has formerly had. He is very pleasant and kind to the children and not easily irritated, so that he is very valuable in the kitchen. As to the sewing, there has not been much done. Mrs. Brown has done the most of it, and Mrs. Packard a little. Mother usually sewed for herself when she had time. The weather has been cold and disagreeable for the greater part of the time and we have had but few callers. And another circumstance which assisted to make our callers few, was a deep religious interest in the community, and a long protracted meeting. In the midst of this religious interest, Mr. Powell was taken sick with chills and fever. He was obliged to suspend his labors for a while, went to San Francisco to recruit, and Rev, Mr. Harker came and took his place. This aged minister (69 years old) labored very faithfully to win souls to Christ, and his labors were blessed in the conversion as we hope, of several, and some were added to the Methodist church also. Our church has received quite an addition to its membership. Those who have united are, Mr. & Mrs. Isaac Brown, Mrs. Sabin, Mr. Rock, Addie Brown and Sisters Clara and Eliza (Josiah's wife)-seven in all two males and five females. On the fifth of April, Ada and Addie Brown were publicly baptized by immersion in the pond at the foot of the hill. As Addie was to be baptized in this manner, Ada chose to be also and we did not oppose it, To us it matters not what form of baptism is used, if only the heart is right through sprinkling is the most convenient method. Ada would also have united with the church in full membership, but I opposed it on account of her age. A few years trial of the life of a Christian will better fit her to honor the profession. Luther did not seem to feel much interest in the meetings, but I thought it was because I could not go. I think he would have gone with me and felt interested. The conversion of the three ladies. Mrs. Kett, Mrs. Sabin and Mrs. Thrift has been a source of great rejoicing to us. All naturally amiable, it seemed as if they were for a long time near the kingdom, Still we know that the decision of Christ, "he that is not for us is against us" would apply to them, without that necessary "change of heart." Well it is for them that they have at last decided to "come out on the Lord's side." Mr. Kett sold his house to the Methodist corporation, and with his family moved to Paradise on the fourth of May. We were sorry to have them go. They made us a pleasant call the evening before they started, as Mrs. Kett said she knew I could not come to bid her goodbye. On that day school commenced. Mr. So. A. Perry teacher. I made extra exertion that Ada might go, though up to this time I had hardly lifted the baby, and was not then able to dress and undress her. As it was we got along pretty well, though some days I did not feel able to stay alone, as I was obliged to do, with the care of the little ones. We send five of the children this term - all that draw school money - as Ida commenced attending school for the first time. It is a good old fashioned school nothing better. Mr. Perry boards here. He is a pleasant man and is to bring his children down to attend school.