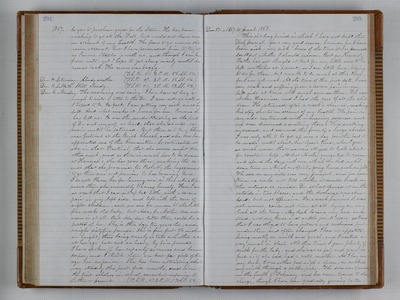 1867. he goes to purchase goods for the Store. He has been wishing to go all the Fall, but would not leave me on account of my health. He fears to go now on the same account, but I have persuaded him to try it, as Emma Staples is with us, and though I am far from well, yet I hope to get along nicely until he comes back. The moon was foggy. (T.S.R. 51. 2 P.M. 56. S.S. 54.) Dec. 14. Saturday. Cloudy weather. (T.S.R. 49. 2 P.M. 56. S.S. 54.) Dec. 15. Sabbath. Still cloudy. (T.S.R. 51. 2 P.M. 53. S.S. 52.) Dec. 16. Monday. The morning was rainy. I have been up long enough to write a letter to the Dr. I am not as well as I hoped to be, In fact, I am getting very sick since he left. And what makes it worse for me, Emma S. has left us. It was the understanding on the part of Dr. and myself at least, that she should remain until he returned. But there is to be a Christmas festival at the Brick Church, and she has been appointed one of the Committee. So interested is she in that Festival, that she seems unfit for other work, and as there is much less to be done at Hannah's, she has gone there, making the excuse that she promised to, Probably the engagement to go there was not previous to her coming here. I do not blame her for leaving me in this situation more than she inwardly blames herself. Here I am so weak that I can sit up but little, with a severe pain in my left side, and left with the care of eight children, and no one for nurse to the little four-weeks-old baby, but Ada, for Mother does not come in at all. But Ada does better than could be expected of her. She is this day ten years old, and weighs sixtyfive pounds. She is four feet 3¼ inches in height, thus being nearly as tall as Luther was at her age but not so heavy by five pounds. I have spoken of her capacity as nurse and house keeper, and I think there are but few girls of her age her superior. She has been attending school very steadily this past five months, and is one of the first scholars in school, somewhat superior to Luther at present. (T.S.R. 49. 2 P.M. 57. S.S. 52.) Dec. 17. 1867 to June 1. 1868. This is a long period in which I have not kept this Daily Journal, for a very good reason, however, for I have been sick-very sick. Some of the time it has seemed doubtful whether I should recover, But our Heavenly Father has not thought it best for my little ones to be left motherless at present, so I am still here, trying to do for them, but unable to do much at this time, for I am yet weak. At the time of this first date, I was very weak and suffering from a severe pain in my left side at times, with much soreness there. Dr. was at San Francisco, and I had the care of all the children. He returned after a week's absence, making his stay shorter on account of my health. The pain in my side continued with increasing soreness, and we soon discovered a swelling there. This swelling increased, and assumed the form of a large abscess. I was only able to be got up once a day for the bed to be made, until about New Year's time, when I grew so much worse that we were obliged to look about for constant help. At last Mother consented to come and spend the days with me, which she did until sometime in March or April, going home such night. The sore on my side was very painful, and for sometime we could not till whether it would break on the outside or inside. Dr. at last opened it on the outside in two places, and the discharge was abundant, but not offensive. For a week previous I was not moved, could not turn at all, lying on my back all the time. My back became very sore and tired, and my knee and ankle joints were so tired that I was obliged to have pillows and cushions put under them and often changed. I had no appetite, living mostly on milk and gruel, and I wasted a way much in flesh. All this time I gave plenty of milk for the baby, and she was as fat and grew as fast as if she had had a well mother. As I lay on my back, I was either fed with a spoon, or sucked my milk through a rubber pipe. The sore was opened on the fourth of February, and has never ceased to discharge, though I have been gradually growing better.