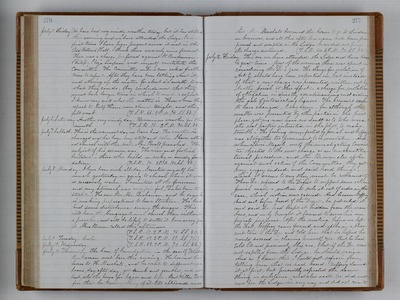 July 5. Friday. We have had very windy weather today, but it has stilled this evening and we have attended the Lodge. It is the first time I have been present since it met in the Odd Fellow’s Hall. I think there were only nine present. There was a charge preferred against W. Brakeman. Philip, Eliza Simpson and myself constitute the committee. The committee on Dr.'s case asked further time to report. After they have been talking about it, and stirring up the matter for about six months, to see what they can do, they conclude now that they must have longer time in which to make a report. I know very well what the matter is. Those whom they expect to help them, were absent tonight, and they felt weak. (T.S.R. 66. 2 P.M. 94. S.S. 88.) July 6. Saturday. Another very windy day. Uncommon weather for this month. (T.S.R. 76. 2 P.M. 94. S.S. 88.) July 7. Sabbath. This is the warmest day we have had. The weather is changed and has been very still and calm. I have attended church with the rest. Mr. Powell preached. The subject of his sermon was, "The wise and foolish builders." Those who build on rocky or sandy foundation. (T.S.R. 74. 2 P.M. 100. S.S. 88.) July 8. Monday. I have been sick all day. I exerted myself too much yesterday in going to church when it was so excessively warm. I vomited all the forenoon and my stomach was very painful, Dr. has been to Stockton. He saw Rev. Mr. Buchanan, and he says he is making preparations to leave Stockton. He has had some disturbance among the singers. This will leave the Congregational church there without a preacher, and will be likely to scatter it. I am sorry for it. Mrs. Brown called this afternoon. (T.S.R. 69. 2 P.M. 96. S.S. 80.) July 9. Tuesday. Cooler. (T.S.R. 59. 2 P.M. 89. S.S. 71.) July 10. Wednesday. (T.S.R. 58. 2 P.M. 90. S.S. 84.) July 11. Thursday. The Com, of Investigation in the case of Wilber Brakeman met here this evening. He loaned his horse to H. Marshall, and he went to different saloons, day after day, got drunk and gambled, and at last, sold the horse for liquor and left. But Wilber testifies that he knew nothing of it till afterwards, and that Mr. Marshall borrowed the horse to go to Linden on business, and all this after his name had been proposed and accepted in the Lodge. So we did not find the charge sustained. (T.S.R. 64. 2 P.M. 90. S.S. 82.) July 12. Friday. This eve we have attended the Lodge and have had a great time. Most of the evening there was spent in considering the Dr.'s case. The charge for violation of Act 2, should have been reported on, but instead of that a new charge was presented written out by brother Josiah to this effect:-a charge for violation of obligation in directly countenancing and aiding the sale of intoxicating liquors. The accusers seem to have changed, I say seem, for although the matter was presented by other parties in the first place, yet we now have no doubt as to who were the real parties interested in the plot to make trouble. The feeling manifested by Josiah and Geffroy was altogether too prominent to be mistaken. And when Lewis Megerle, one of the investigating Committee objected to the new charge as an unconstitutional procedure, and Mr. Brown also spoke against such action of the Committee, they got very angry indeed, and said hard things, which it seems to one they must be ashamed of When Dr. referred to the Digest to support some action Josiah made a motion to rule it out of order in this case, which motion was carried. And became Geffroy had not before heard of the Digest, he ridiculed it and said Dr. had kept it hidden from the members, and only brought it forward to serve his own private purposes. After the meeting, before we left the Hall, Geffroy came forward and spoke in a pleasant tone to the Dr. and told him that he hoped he would succeed in clearing himself, &c. But he had told Edward previously this eve, that if the Dr. was not expelled from the Lodge, he should resign. And as I knew this I could not refrain from telling him what we had heard. Geffroy denied it at first, but presently repeated the same thing in substance, and also said he did not care for the Lodge in any way, and did not care to