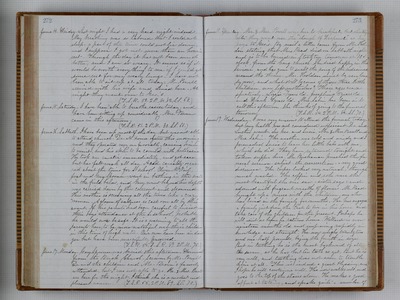 June 14. Friday. Last night I had a very hard night indeed. My breathing was so labored that I could not sleep a part of the time could not lie down, and I suppose I got not more than an hour's rest. Through the day it has not been much better, and I am so weary. It seems as if it would be worth everything to me if I could get some rest for my weary lungs. I have not been able to sit up at all today. Mr. Powell arrived with his wife and dined here. At night they went over to Geo.'s. (T.S.R. 52. 2 P.M. 82. S.S. 68.) June 15. Saturday. I have been able to breathe easier today, and have been sitting up considerably. Mrs. Brown came in this afternoon. (T.S.R. 51. 2 P.M. 80. S.S. 66.) June 16. Sabbath. I have been up most of the day, but was not able to attend church. Dr. ate some oysters this morning and they operated very unfavorably, causing him to vomit, and his skin to be covered with urticaria. He took an emetic immediately, and got ease, but has felt weak all day. A sad causality occurred about the time for S. school. Oliver McNeil, Joab and Grey Spooner went in bathing in the water in the field below, and Grey went beyond his depth was carried down by the current and drowned. His mother is screaming all the time like a crazy woman. A gloom of sadness is cast over all by this event. If his parents had been careful to insist in their boys' attendance at the S. school, probably he would now be safe. It is a warning to all the parents here, to be more watchful over their children in this time of high water. Our own have been in danger but have been mercifully preserved. (T.S.R. 55. T.S.R. 89. 2 P.M. 75.) June 17. Monday. Grey Spooner was buried this afternoon. Funeral from the Brick Church. Sermon by Mr. Powell Dr. and the children and Mr. Brown's family attended, but I was not able to go Mr. & Mrs. Powell are here for the night. I think she is a modest and pleasant woman. (T.S.R. 55. 2 P.M. 89. S.S. 70.) June 18. Tuesday. Mr. & Mrs. Powell were here to breakfast but shortly after they went over the "slough of Despond" as he says to Geo.'s. By mail a letter came from Mr. Holden stating that Mrs. Read died on Sabbath night and is to be buried in Stockton tomorrow at 10 o'clock, from the long church. She died happy in the Saviour, and has gone to swell the song of the redeemed around the throne. Mr. Holden must be very lonely now, and what will become of those three little children, now left motherless? Their ages are respectively. Lizzie - 7 years old. Josephine - 5 years old - and Frank - 3 years old. Mrs. Sabin has been in to call this afternoon. She thinks of going to the funeral tomorrow. (T.S.R. 54. 2 P.M. 82. S.S. 70.) June 19. Wednesday. I was very anxious to attend the funeral today, but my health was not considered sufficient. Dr. and Luther went also Geo, and Susie, Mr. & Mrs. Powell and Mrs. Sabin. The weather was cold and windy and I persuaded Susie to leave her little babe with me, which she did. They have returned tonight and taken supper here, Mr. Buchanan preached the funeral sermon - subject - the resurrection a very good discourse. The corpse looked very natural, though much wasted. The coffin and robe were the most beautiful she ever saw - sister says and adorned with fragrant wreaths of flowers. Mr. Read brought up a nurse with the children, one who has lived in the family for months. He has engaged a family just from the East to live in his house and take care of the children for the present. Perhaps he will visit us before he returns home. Willard is now nineteen months old and improving rapidly in knowledge and strength. He now weighs twentytwo and one-half pounds, being the fourth in size. But in teething he is the most backward of all the seven, as he has but ten teeth as yet. But he is very well, and teething does not seem to trouble him at all. This is indeed a great blessing, and I hope he will continue well. He now walks well, and goes to the top of the stairs alone. He makes a good effort at talking, and speaks quite a number of