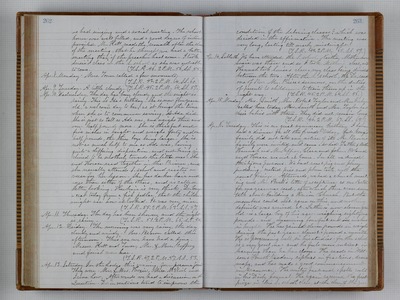 we had singing and a social meeting. The schoolhouse was well filled, and a good degree of interest prevailed. Mr. Kett made the remark after the close of the meeting, that he thought we had a better meeting than if the preacher had come. I took Susie's class in the S. school as she was not able to come. (T.S.R. 46. 2 P.M. 56. S.S. 55.) Apr. 8. Monday Mrs. Tower called a few moments. (T.S.R. 42. 2 P.M. 64. S.S. 60.) Apr. 9. Tuesday. A little cloudy. (T.S.R. 45. 2 P.M. 64. S.S. 57.) Apr. 10. Wednesday. The day has been cloudy and the night is rainy. This is Ida's birthday. She is now five years old, a welcome day to her, as it brings the time when she is to commence sewing, as Ada did. She is just as tall as Ada was, and weighs three and one-half pounds more. She is three feet and five inches in height and weighs forty and one-half pounds, the three boys being larger. She is not as much help to me as Ada was, having quite a differing disposition, and not being inclined to be motherly towards the little ones. She and Horace read together in the Primer, and she usually attends S. school and recites a verse for her lesson. She has darker hair and eyes than either of the others, and is called better looking. Her hair is very thick. Dr. bought a crab today from a fish pedlar, that the children might see how it looked. It was very nice. (T.S.R. 55. 2 P.M. 63. S.S. 57.) Apr. 11. Thursday. The day has been showery and the night is rainy. (T.S.R. 51. 2 P.M. 65. S.S. 54.) Apr. 12. Friday. The morning was very rainy, the day cloudy and windy. Mrs. Brown called this afternoon. This eve we have had a sing. Messrs. Kett and Tower, Mr. & Mrs. Geffroy and Josiah were here. (T.S.R. 47. 2 P.M. 57. S.S. 53.) Apr. 13. Saturday. In the Lodge this evening, four persons joined. They were Mr. & Mrs. Hoxie, Mrs. McNeil and Irena Low. Afterwards we had a discussion on the Question - Do inventions tend to improve the condition of the laboring classes ? which was decided in the affirmative. The meeting was very long, lasting till nearly midnight. (T.S.R. 42. 2 P.M. 60. S.S. 59.) Apr. 14. Sabbath. We have attended the S. school. Neither Mother nor Susie was there and so I took Mother's class, and Hannah took Susie's class, my class being divided between the two. After the S. school, the Dr. read one of Rev. Mr. Pierces sermons, on the duties of parents to children to train them up in the right way. (T.S.R. 45. 2 P.M. 64. S.S. 56.) Apr. 15. Monday. Mrs. Smith, Mrs. Robert Taylor and Mrs. Gorham called here today. Mrs. Smith and Mrs. Taylor had their babies with them. They did not remain long. (T.S.R. 46. 2 P.M. 67. S.S. 63.) Apr. 16. Tuesday. This is our great anniversary birthday. I have had a dinner for all the friends today, but George's family did not take any notice of it. Mr. Brown's family were invited and came - so did Father & Mother Hannah and Mr. Geffroy, Clara and John Roland and Horace are not at home. In all we dined thirtyone persons. We had roast pig and plum pudding, custard pies and plum tarts, with the usual fixings. Afterwards, we had a church meeting and Mr. Powell's letter of acceptance as our Pastor for one year was read, after which there arose some talk about building a Union Church. But the members could not agree on this, and nothing definite was arrived at. Luther is now eleven year old - is a large boy of his age - weighing eightyone pounds - and measuring four feet and six inches in height. He has gained eleven pounds in weight during the past year, almost a pound a month. He is progressing well in his studies - for the school is a very good one - and he feels more interest in learning than he has done. He reads in Willson's Fourth Reader, ciphers in fractions, draws maps, and has made a good commencement in Grammar. He writes fast and spells well in his Daily Journal. He again received the first prize in his S. school class, at the class of the year