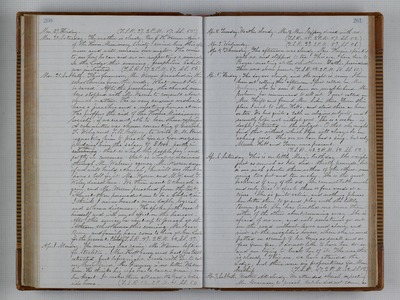 Mar. 29. Friday. (T.S.R. 37. 2 P.M. 57. S.S. 55.) Mar. 30. Saturday. The weather is cloudy. Rev. J. H. Warren. Agent of the Home Missionary Society arrived here this afternoon and will remain over night. He comes to see how he can aid us in supporting a minister. In the Lodge this evening, Josephine Cahill was initiated. (T.S.R. 37. 2 P.M. 67. S.S. 58.) Mar. 31. Sabbath. This forenoon, Mr. Warren preached in the schoolhouse from the words. "What must I do to be saved." After the preaching, the church members stopped with Mr. Warren to consult about church matters. He is very anxious we should have a preacher and a meeting house at over. He proffers the aid of the Home Missionary Society, if we are not able to bear these expenses. A committee was chosen consisting of Geo. Locke T. Wiley and T. B. Geffroy, to write to Mr. Powell requesting him to preach for us for one year pledging him the salary of $1000. partly in gold that is what the people pay, and partly in currency - that is what is received through Mr. Warren's agency. Mr. Warren says if we will build a church, he will see that we have a bell for it. Mr. Warren and M.W. and T.Wiley dined here. We then went to church again, and Mr. Warren preached from the text "Almost thou persuadest me to be a Christian". I think I never heard a more deeply logical and solemn discourse. He spoke with case to himself and with much effect on the hear ears. After this service he went up to preach at the Athearn schoolhouse this evening. Mr. Isaac Brown and family have come to live at Geo. Locke. for the present Cloudy. (T.S.R. 49. 2 P.M. 64. S.S. 57.) Apr. 1. Monday. The morning was rainy. Mr. Warren left us for Stockton. Mrs. Kett came and had two teeth extracted. Just before night, I rode with Dr. to call on Mrs. Baird. Mrs. Guernsey is no better. We saw him. He thinks his wife has a can as growing on her breast. It makes them all sad. We had a cold side home. (T.S.R. 52. 2 P.M. 61. S.S. 50.) Apr. 2. Tuesday. Weather cloudy. Mr. & Mrs. Geffroy dined with us. (T.S.R. 45. 2 P.M. 57. S.S. 52.) Apr. 3. Wednesday. (T.S.R. 39. 2 P.M. 59. S.S. 56.) Apr. 4. Thursday. The afternoon was cloudy. Mrs. Hoxie spent it with us, and stopped to tea. This eve, I have been to Prayer-meeting at the schoolhouse. Father presided. There were eleven present. (T.S.R. 42. 2 P.M. 68. S.S. 60.) Apr. 5. Friday. The day was cloudy and the night is rainy. I have been out calling this afternoon. I just called on Mrs. Gorham, who is soon to leave our neighborhood. Mr. Gorham has commenced to sell out. I next called on Mrs. Thrift and found Mrs. Sabin there. From this place I went to Mrs. Kett's, and staid there an hour or two. We had quite a talk on religious subjects, and I earnestly hope not without good. She is a seeker - is deeply interested in the subject. O that she might find that without which there will always be an aching void. This eve we have had a sing - but only Messes. Kett and Tower were present. (T.S.R. 48. 2 P.M. 62. S.S. 52.) Apr. 6. Saturday. This is our little Mary's birthday. She weighs just as much as Ida did - thirty pounds, but is one inch shorter than either of the others - measuring two feet and ten inches. She is the most backward of any of the six. She cannot talk much and only tries to speak three or four words at a time. She is quite active, and nothing pleases her better than to go and play with the little Brown girls. She has troubled me more than either of the others about running away. She is afraid of no one, and will sometimes go out on the road without leave and alone, and visit at the neighbor's houses, where she is much petted on account of her being so small and so free from fear. I do not like to have her do so and am trying to break her of it. The weather is cloudy. This eve, we have attended the Lodge, and there were six propositions for Membership. (T.S.R. 47. 2 P.M. 62. S.S. 52.) Apr. 7. Sabbath. Weather still cloudy. We attended church, expecting Mr. Guernsey to preach, but he did not come, so