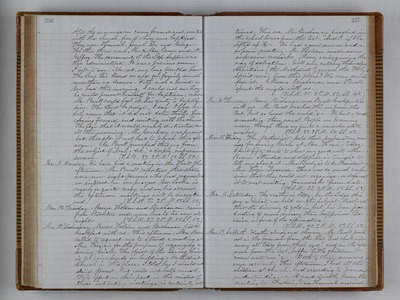 After the sermon seven came forward and united with the church, four of whom were baptized. They were Hannah, Josiah, Dr. and George. The other three were Mr. & Mrs. Brown and Mr. Geffroy. The sacrament of the Lord's Supper was then administered. It was a precious season. I felt to say, "Now rest, my long troubled heart." The Lord has blessed us and our family much more than we deserve. With such a mind as Geo. had this morning, I could not see how he could present himself for baptism, or how Mr. Powell could feel it his duty to baptize him. The Lord be judge, I say. I bless his holy name that it did not deter the Dr. from coming forward and uniting with the church. The fear that it would nearly distracted me all the morning. Mr. Guernsey was present but thought it not best to preach this afternoon. Mr. Powell preached this eve from the subject of "Noah's Ark," a deeply impressive sermon. (T.S.R. 37. 2 P.M. 55. S.S. 50.) Mar. 11. Monday. We have had a meeting in the Hall this afternoon, Mr. Powell reported that there were now eight persons who had requested an interest in our prayers. Geo. Locke is nearly or quite crazy, and on his account, the afternoon meetings will be discontinued. (T.S.R. 37. 2 P.M. 55. S.S. 52.) Mar. 12. Tuesday. Messrs. Holden and Buchanan came from Stockton and were here to tea and all night. (T.S.R. 37. 2 P.M. 55. S.S. 52.) Mar. 13. Wednesday. Messrs. Holden and Buchanan took breakfast with us. This afternoon, Mrs. Moore called to request me to attend a meeting at Mrs. Hoxie's for the purpose of organizing a Sewing Circle. The object of the Sewing Circle is to raise funds for building a Methodist Church in this place. I told her I should not stand opposed, but could not help much. This effort on their part in the midst of these interesting meetings, is certainly ill timed. This eve, Mr. Buchan an preached in the school house from the text, "And I, if I be lifted up." &.c We had a good sermon and a solemn meeting. Mr. Holden made some impressive remarks. Many are inquiring the way of salvation. Will any calling themselves Christians (the Methodists) grieve the Holy Spirit away from this place? We very much fear it. Messrs. Buchanan and Powell spent the night with us. (T.S.R. 35. 2 P.M. 50. S.S. 48.) Mar. 14. Thursday. Messrs. Buchanan and Powell breakfasted with us. Mr. Powell preached this eve from the text, "God so loved the world," etc. We had a smaller meeting than usual. People are becoming weary, though there are quite a member still anxious. (T.S.R. 33. 2 P.M. 54. S.S. 53.) Mar. 15. Friday. The Methodists held their preparatory meeting for Sewing Circle at Mrs. Hoxie's today. I sent fifty cents to show my good will. Mrs. Brown attended and stopped in tonight to tell me about it. Mrs. Boody is to be President Mrs. Hoxie. Treasurer. There was so much confusion that they could not organize, so deferred it to next meeting, four weeks from date. (T.S.R. 38. 2 P.M. 55. S.S. 53.) Mar. 16. Saturday. The weather is cloudy. In the Lodge this eve a debate was held or the Subject. Resolved that the discovery of gold in Cal. has been productive of more misery than happiness? Decision in favor of the affirmative. (T.S.R. 40. 2 P.M. 59. S.S. 52.) Mar. 17. Sabbath. Weather cloudy and showery. Mr. Powell preached in the forenoon from the text, "God shall wipe away all tears from their eyes," and in the afternoon from the text," Suffer little children to come unto me," etc. Both of these sermons were excellent. This afternoon, I had all the children at church, and according to previous understanding, we all went directly from the meeting to Father's, to see Hannah married