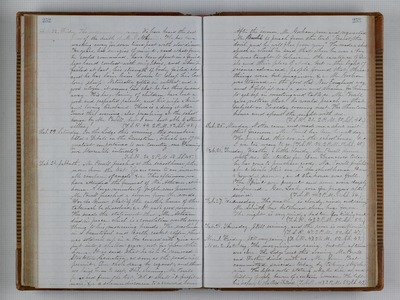 Feb. 22. Friday. The morning was rainy. We have heard the sad news of the death of Mr. Athearn. He has been wasting away for some time past with slow disease For years, his energies of mind, and what fund. he could command, have been spent in a first less land contest with neighbors, and when he failed at last, his strength of body failed also and he has lain him down to sleep his last long sleep. Naturally gifted in intellect, and a good citizen, it seems sad that he has thus passed away. His large family of children have lost a good and respected parent, and his wife a kind and loving husband. There is a sing at Mr. Tower's this evening, also preaching at the schoolhouse by Mr. Powell, but I am not able to attend either. (T.S.R. 44. 2 P.M. 52. S.S. 48.) Feb. 23. Saturday. In the Lodge this evening, the members held a Debate on the Question, "which are of the greatest importance to our country, our Farming or our Mercantile interests?" (T.S.R. 34. 2 P.M. 48. S.S. 45.) Feb. 24. Sabbath. Mr. Powell preached at the schoolhouse this more from the text, "Ye are come to an innumerable company of angels," etc. This afternoon we have attended the funeral of Mr. Athearn, at his house. A large number of people were present. Mr. Powell preached a sermon from the words, "For we know that if the earthly house of this tabernacle be dissolved," &.c It was a good sermon. He made the statement that Mr. Athearn died in peace, which is a consolation worth every thing to his mourning friends. He was laid in a beautiful and costly casket coffin, which was soldered up in a box covered with zine and put into a shallow grave, not far from the house. It is said that he is to be removed to Stockton Cemetery, as soon as the roads will permit. Our choir sang by request, and then we laid him to rest. This evening, Mr. Powell preached from the text, "What shall it profit a man," &. c a solemn discourse to a crowded house. After the sermon, Mr. Gorham rose and requested Mr. Powell to preach from the text, "Resist the devil, and he will flee from you." He made a short speech in which he said that when he was a boy he was taught to believe in the existence of devils and their place of abode, but as the light of science advanced, people found that these things were but imaginary, etc. Mr. Gorham was trained in the good old New England way and I felt it was a sin and shame for him to get up in meeting and talk so. Mr. Powell gave notice that he would preach on that subject on Tuesday evening next. He then came home and spent the night with us. (T.S.R. 31. 2 P.M. 50. S.S. 48.) Feb. 25. Monday. Mother came and made me a short visit this forenoon. Mr. Powell has been here all day. He preached this eve in the schoolhouse, but I was too weary to go. (T.S.R. 38. 2 P.M. 50. S.S. 48.) Feb. 26. Tuesday. Weather a little cloudy. Mr. Powell dined with us. Dr. started for San Francisco today he has gone to purchase goods. Mr. Powell preached about devils this eve in the schoolhouse. It was a powerful sermon, and the house was full. The Spirit was present and some were deeply impressed. Geo. Locke rose for prayers after service. (T.S.R. 44. 2 P.M. 60. S.S. 54.) Feb. 27. Wednesday. The weather is cloudy, windy and rainy Mr. Smith has butchered eleven hogs for us. The night is very windy, bad time for killing meat (T.S.R. 49. 2 P.M. 55. S.S. 52.) Feb. 28. Thursday. Still raining, and the river is over flowing. (T.S.R. 47. 2 P.M. 50. S.S. 47.) Mar. 1. Friday. Still very rainy. (T.S.R. 47. 2 P.M. 52. S.S. 49.) Mar. 2. Saturday. The morning was rainy, but the afternoon was clear. The Lodge met this evening. Mr. Powell and Father dined with us. Mr. James Peat committed suicide today by taking strychnine. He left a note stating why he did so, and bidding people beware of a certain woman. He left his property to the Odd Fellows. (T.S.R. 49. 2 P.M. 55. S.S. 49.)