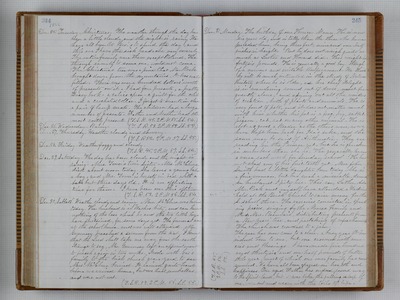 Dec. 25. Tuesday. Christmas. The weather through the day has been a little cloudy and the night is rainy. We have all been to Geo.'s to spend the day, and this eve I have the sick headache very severely. The entire family were these except Roland, He through enmity to some one, would not come. The Christmas tree was a pine that Mr. Rock brought down from the mountains. It was well filled. There was over a hundred dollars worth of presents on it. I had four presents, a pretty Diary book - a calico apron - a quilt for the crib and a crocheted collar. I forgot to mention also a pair of lamp mats. The children had a large number of presents. Father and Mother had the most costly presents. (T.S.R. 45. 2 P.M. 55. S.S. 54.) Dec. 26. Wednesday. Rainy. (T.S.R. 51. 2 P.M. 53. S.S. 53.) Dec. 27. Thursday. Weather cloudy and showery. (T.S.R. 52. 2 P.M. 57. S.S. 55.) Dec. 28. Friday. Weather foggy and cloudy. (T.S.R. 45. 2 P.M. 59. S.S. 54.) Dec. 29. Saturday. The day has been cloudy and the night is rainy. Mrs. Tower's twin Sister - Mrs. McClure died about noon today. She leaves a young babe a boy, and Mrs. Tower is herself in bed with a babe but three days old. It is an afflicting time for them. I have been over this afternoon. (T.S.R. 53. 2 P.M. 56. S.S. 54.) Dec. 30. Sabbath. Weather cloudy and rainy. Mrs. McClure was buried today. Her husband is in Washoe City, and can know nothing of the loss which he and the two little boys have sustained, for some days yet. The funeral was at the schoolhouse, and was well attended. Mr. Guernsey preached a sermon from the text, " I know that the Lord shall take me away from the earth. Strange to say, Mr. Guernsey left an appointment to preach again in two weeks. I rode with Geo's family to the brick church grave-yard to see Mrs. McClure buried. It rained quite hard before we arrived home, but we had umbrellas, and were not wet. (T.S.R. 52. 2 P.M. 56. S.S. 55.) Dec. 31. Monday. The birthday of our Horace Mann. He is now six years old, and is taller than the three who have preceded him, being three feet, nine and one-half inches in height. But he does not weigh quite as much as Luther and Howard did. His weight is forty six pounds. He is generally a good boy, though of a nervous and irritable temperament. We think he will be much interested in the study of Natural History when he is older, as his chief delight is in wandering round out of doors, most frequently alone, and shying out all the wonders of creation, both of plants and animals. He is very fond of pets, and it does not matter much with him whether his pet is a frog, pig, rabbit pigeon, cat, rat or any other animal. He is not as good a Reader as the others were, as we have kept him back for Ida's sake, and the same may be said of Arithmetic. They are reading in the Primer yet, but he is quicker in members than she is. He generally learns a verse each week for Sunday school. He has not shed any of his first teeth yet. Mrs. John Smith had a little daughter born today. She is a fine woman, but has such a miserable, drunken husband. I pity her. This eve, Luther, Ada Mr. Rock and myself have attended a Festival held at the Brick Church to raise money for the S. school there. The exercises consisted in speaking prices, singing by the Morse family and Mr. & Mrs. Beauvais, distributing presents from a New Years' tree, and partaking of refreshments The church was crowded to a jam. The year has now come to a close, a busy year it has indeed been to me, but one crowned with mercies and blessings. I have made five hundred and thirty six and one-half pounds of butter this year, most of which our own family has consumed. We have all been spared in health and happiness. Our aged Father has indeed passed away to the Spirit land, but it was like the falling asleep of one, worn out and weary with the toils of life. (T.S.R. 45. 2 P.M. 54. S.S. 52.)