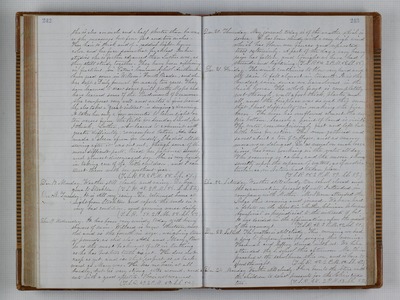 she is also an inch and a half shorter than he was as she measures but four feet and two inches. Her hair is thick and of a reddish light brown color, and her face somewhat freckled. In her studies she is farther advanced than Luther was, as they still study together. They have been ciphering in fractions in Eaton's Common School Arithmetic have read some in Willson's Fourth Reader, and she has kept a Daily Journal for nearly two years. They have learned to draw some quite pretty Maps and have learned some of the Rudiments of Grammar. She composes very well and writes a fine hard. She also takes a great interest in singing & drawing. It takes her only a few minutes to learn light or ten verses from the Bible for Sunday School, but I think, Luther, who learns to commit with greater difficulty, remembers better. Ada has made a sleeve apron for herself. She did all the sewing after it was cut out, though some of the more difficult parts, tried her patience severely and almost discouraged her. She is very handy in taking care of the little children, and I can trust them with her without fear. (T.S.R. 50. 2 P.M. 55. S.S. 51.) Dec. 17. Monday. Weather still cloudy and rainy. Dr. has gone to Stockton. (T.S.R. 48. 2 P.M. 56. S.S. 53.) Dec. 18. Tuesday. It is still very rainy. Dr. returned home at night from Stockton and reports the roads in a very bad condition, and growing worse daily. (T.S.R. 51. 2 P.M. 52. S.S. 52.) Dec. 19. Wednesday. It has been very windy today with heavy showers of rain. Willard is now thirteen mos. old and is the fourth in size, weighing twenty pounds, as did also Ada and Mary. But he is the most backward of all in teething as he has but two teeth is yet. He does not creep as yet, and in that respect is as backward as Mary was. He has no hair at all hardly, but is very strong, rolls around, and eats with a good appetite. He is not weaned. (T.S.R. 49. 2 P.M. 54. S.S. 54.) Dec. 20. Thursday. My journal today is of the weather which is severe. It has been cloudy with a very high wind which has blown over fences and uprooted trees extensively. A part of the day a very heavy rain has fallen, and tonight we have had thunder and lighting. (T.S.R. 54. 2 P.M. 58. S.S. 56.) Dec. 21. Friday. The wind continues to blow very hard and the rain to fall almost in torrents. It is the hardest rain since we have lived in the brick house. The whole front is completely wet through, wall a foot thick, plaster and all, and the fireplace was so wet this morn that I had difficulty in making the fire burn. The river has overflowed almost the entire bottom. Scarcely a point of land is visible. The water rose surprisingly fast and left but little time for action. The men gathered and saved about a ton of cabbages, and as many more were deluged. Dr. as usual on such occasions, has been working in the water all day. The evening is calm, and the moon shines sweetly upon the expanse of waters, as if no disturbance in Nature had taken place. (T.S.R. 55. 2 P.M. 59. S.S. 59.) Dec. 22. Saturday. Weather still cloudy. Our school closed and the examination passed off well. I attended in company with Mother. Mr. Brown attended the Lodge this evening and joined. We have had a debate on the Question whether Chinese labor was beneficial or prejudicial to the interests of Cal. It was decided in the affirmative, upon the merits of the argument. (T.S.R. 48. 2 P.M. 52. S.S. 50.) Dec. 23. Sabbath. The weather is still cloudy. This morning we had a sing to prepare prices for singing this evening. Hannah and Geffroy dined with us. We have attended the S. school this afternoon. Mr. Oliver preached at the schoolhouse this eve, and is here to spend the night. (T.S.R. 42. 2 P.M. 52. S.S. 49.) Dec. 24. Monday. Weather still cloudy. I have been to the Store with the children to select presents for the Christmas tree. (T.S.R. 48. 2 P.M. 53. S.S. 52.)