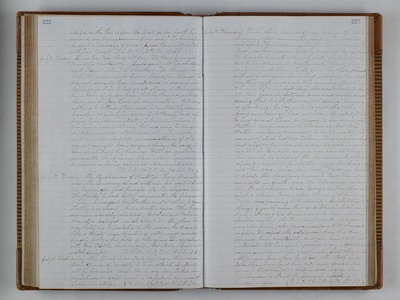 "As far as the East is from the West, so far hath he removed my transgressions from me." To his wife he sent a message of peace. James Reed will watch with him tonight. (T.S.R. 55. 2 P.M. 81. S.S. 62.) July 9. Monday. Susie has been here all day. We have fanned Grandpa constantly. Susie sent all her children and I sent Mary to Mother's. We thought perhaps the noise would disturb Grandpa, though he does not seem to hear it. Indeed, it seems quite difficult for him to hear at all. Many of the neighbors have been in to see him, but he does not notice them much. Geo. Locke is occasionally in, but does nothing to better matters, and is constantly teasing Grandpa to give him "power of Attorney" and appoint him Administrator. Grandpa refuses to give him a "power of Attorney" but once said he might be Administrator. Afterwards, when Dr. talked with Grandpa about the unreasonableness of the request owing to Geo.'s in competency, he said to Geo., speaking of his business, "Well, you and Dean must settle it up in my place". But Geo. means to insist on being appointed. Administrator. (T.S.R. 54. 2 P.M. 84. S.S. 72.) July 10. Tuesday. Mr. Buchanan of Stockton (Cong. Minister) and Mr. Guernsey dined with us. Geo. went to Stockton last night and brought Mr. Buchanan out. He thinks he had better administer the Sacrament to him. So we sent for Father and Mother to come. Father was absent, but Mother came. The Communion was administered, but I do not believe Grandpa realized much about it, for when he was held up to partake of the wine, he drank like a thirsty man drinking water, and would hardly let go his hold of the glass. Dr. watched with his Father last night, but Bela Shaw will watch tonight. (T.S.R. 56. 2 P.M. 81. S.S. 71.) July 11. Wednesday. Mr. Buchanan took his leave this morn. Grandpa said "goodby" to him which is about all he has said today. He is very low, takes no nourishment except such us we put in his month. Susie here all day. (T.S.R. 52. 2 P.M. 86. S.S. 74.) July 12. Thursday. Father Locke has passed away from earth. This morning, about sunrise, Dr. went to his bedside and said, "Good morning, Father, how do you feel?" "Bad" was his answer, and he never spoke again. We thought him struck with death about 7 o'clock, but he continued to breathe until twenty five minutes past three, P.M. when he died, almost without a struggle. Susie had not done her washing this week, and early this morning, thinking this might not be his last day, she went home to do it. Geo. came in between seven and eight, and seeing that his Father was past seeing, hearing or speaking, he began to lament that the Company money had not been divided. This he had several times proposed to do during his Father's confinement to the house, but his Father would not consent to do it, until the account of stock had been taken. This was finished last night, but Grandpa was too sick to realize it. So Geo. after saying over several times, how much he wished the Co, money had been divided, went to his father, and speaking into his ears, said very loud, "Don't you want to divide the Company money?" But those ears were cold in death, and the lips made no reply. It shocked me to see George so heartless in such a solemn hour, when the soul of his aged. Father was passing into eternity. Surely the things of earth seem but as triples in such an hour. I was glad Susie was not here. No one besides me but the Dr. was present. Geo. soon went for Susie, who remained here till almost night. We wiped the cold sweat from his brow, fanned him constantly, and gave him water at intervals, tell his spirit passed away. After dinner we sent for Mother and Sarah, and they and others were here when he died. Mr. Polk and Bela Shaw have laid him out, and Josiah has gone to Stockton to get a coffin and engage Mr. Buchanan to attend the funeral, according to Grandpa's request. (T.S.R. 55. 2 P.M. 92. S.S. 77.)