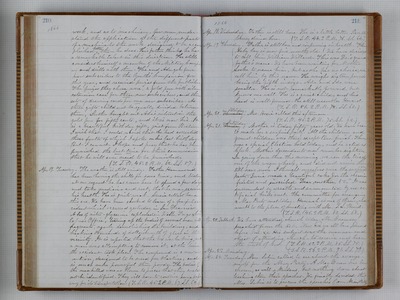 1866 work, and as to machinery, few men understand the application of the different parts of a machine to the work designed to be accomplished better than he does. His father thinks he has a remarkable talent in this direction. He stills considers himself a member of the Military Company and drills with them. He and Ada got four new subscribers to the Youth's Companion for this year, and received prizes from the publisher The prizes they close were, a gold pen with silver extension case for three new subscribers, and three sets of drawing cards for one new subscriber. As these gifts could not be equally divided between them, Luther bought out Ada's interest in the gold pen for fifty cents, and it is now his. It is a beautiful birthday gift, just from Boston. I wish that I could record that he had corrected those faults of which I spoke on his last birthday. But I cannot. I hope and pray that he has been punished the last time for their commission that he will ever need to be punished. (T.S.R. 45. 2 P.M. 62. S.S. 57.) Apr. 17. Tuesday. The weather is still windy. Father Hammond has been having the chills for some time, and today at our request he has come here to spend a few days and take medicine and rest, that he may recover his health. He is quite weak. Susie called here this eve. We have been shocked to learn of a fearful accident which occurred yesterday in San Francisco. A box of nitro-glycerine exploded in Wells, Fargo & Co's Express Office, tearing up the bodies of several men into fragments, nearly demolishing the building, and breaking thousands of dollar's worth of glass in the vicinity. It is reported that the box was leaking, and a man was attempting to remove it, at the time the accident took place. The compound is a new invention, designed to be used for blasting, and is much more powerful than powder. The bodies of the men killed were so blown to prices that they could not be identified. They will have to contrive some safer way for its transportation. (T.S.R. 45. 2 P.M. 67. S.S. 62.) 1866 Apr. 18. Wednesday. Father is still here. He is a little better. Rev. M. Curry dined here. (T.S.R. 44. 2 P.M. 76. S.S. 64.) Apr. 19. Thursday. Father is still here and improving in health. The baby boy is now five months old. We have decided to call him William Willard. This was Dr.'s grand father's name. We have been waiting for Mother Locke to name him, but as she has no choice, we call him by this name. He weighs sixteen pounds being the fifth in size. Ada and Ida were smaller. He is not remarkably forward, but knows me well. He is a quiet child, and his head is well formed. He still resembles Howard. (T.S.R. 51. 2 P.M. 72. S.S. 60.) Apr. 20. Friday. Mrs. Hoxie called this afternoon. (T.S.R. 45.2 P.M. 75. S.S. 62.) Apr. 21. Saturday. Mother is today fifty years old. We have been to make her a surprise party. All the children and grand children were there except Bro. Josiah. There was a special Election held today, and he acted as Clerk. Mother's descendants now number eighteen In going down there this morning, we ran the tire off one of the wagon wheely, and did not arrive there till near noon. I thought ourselves were the surprise party. Susie made a beautiful cake for the occasion frosted and inscribed "Dear mother, 50," It was surrounded by wreaths and surmounted by an artificial bird's nest. The committee for arranging a May Party met today. Hannah is one of them, and went to the place of meeting with Mr. S.S. Baird. (T.S.R. 45. 2 P.M. 80. S.S. 68.) Apr. 22. Sabbath. We have attended church today. Mr. Guernsey preached from the text, "Now are we all here present before God." etc. His subject was the manner and object of attending church to receive and hear the truth of God. (T.S.R. 52. 2 P.M. 85. S.S. 75.) Apr. 23. Monday. (T.S.R. 56. 2 P.M. 91. S.S. 79.) Apr. 24. Tuesday. Mrs. Sabin called to see about the arrangements for the May Party. A May Queen has been chosen, as well as Maidens, but nothing done about teaching them their speeches. We finally decided that Mrs. Sabin is to procure the speeches Room Miss Mills