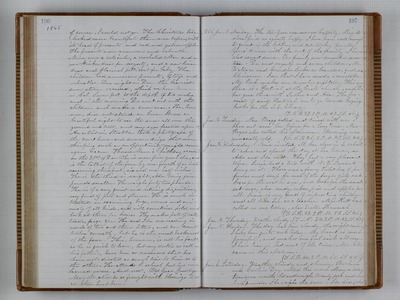 1865 of course, I could not go. The Christmas tree looked more beautiful than ever before, with its load of presents and red and yellow apples. The presents were numerous and valuable. Mine were a reticule, a crocheted collar and a new kinker dress for myself, and a new liner dress and flannel petticoat for baby. The children had numerous presents, of toys and valuables. One night in Dec. the heaviest snow storm occurred, which we have know in Cal. Snow fell to the depth of two inches and in the morning Dr. went out with the children and made a snow man. He, however, did not stand an hour. It was a beautiful sight to see the snow all over the ground and trees, and my eyes feasted upon it. An artist in Stockton took a photograph of the court house and surroundings that man, thinking such as an opportunity might never again occur. Horace Mann's birthday occurred on the 31st. of Dec. He is now five years old, and is the tallest of the four by one-fourth of an inch measuring three feet, six and one-half inches. He is the third in weight, Ada being five pounds smaller. He weighs forty two pounds. He is of a very quiet and retiring disposition, very fond of pets and flowers. He is much interested in examining bugs, worms and animals of all kinds, and will sometimes hold and look at them for hours. He makes pets of rats, toads, frogs, etc. He and Ida are reading in words of two and three letters, and can count twelve correctly, but he is the most backward of the four. This, however, is not his fault, as he is quick to learn, but my duties as well as his father's, have been so numerous that we have not devoted as much time to him as to the others. He attends S. school but has news learned verses. And now, Old year, Goodbye. May the New be as fraught with blessings to us as thou hast been. 1866.Jan. 1. Monday. The New Year commences happily. May its close find us equally happy. I have been well enough to go out in the kitchen and eat turkey for New Years' dinner with the rest of the family. I have also sewed some. Our family now numbers seventeen. Dr. and myself and seven children, Mr. Wallace and Grandpa Locke as boarders, and six Chinamen. I see that I have made a mistake. Mr. Rock makes our number eighteen. This eve there is a Festival at the brick church, and Dr. has gone there with Luther and Ada. The proceeds of said Festival are to go towards buying books for the S. S. library. (T.S.R. 29. 2 P.M. 49. S.S. 46.) Jan. 2. Tuesday. Mrs. Bragg called and dined with us. I have not seen her before for a long time. Mrs. Rogers also called his afternoon. Morning was unusually cold. (T.S.R. 26. 2 P.M. 49. S.S. 44.) Jan. 3. Wednesday. Susie invited all her class in S. school to come and spend the day at her house, so Ada and Ida went. They had a very pleasant time. Susie had a tree with N. Y. Presents hung on it. There was a fancy toilet box of perfumes and soap for each of the larger girls, work. boxes for the next in size, and books for the smallest ones, also candy, cakes, pies and apples for all. Susie is very fond of interesting children and all like her as a teacher. Mrs. Kett has called on me today, also Sister Hannah. (T.S.R. 28. 2 P.M. 51. S.S. 46.) Jan. 4. Thursday. Weather cloudy. (T.S.R. 34. 2 P.M. 49. S.S. 47.) Jan. 5. Friday. The day has been cloudy, the night rainy. I have been quite sick today. My breast is more painful, and makes me feel sick all over. I have been in bed most of the time. Mrs. Sabin came in this afternoon. (T.S.R. 44. 2 P.M. 60. S.S. 55.) Jan. 6. Saturday. Weather cloudy and showery. Barbara and Caroline Day called this morn. Mary is today twenty one months old and weighs twenty four and one half pounds. She weighs the same. Ida did, who