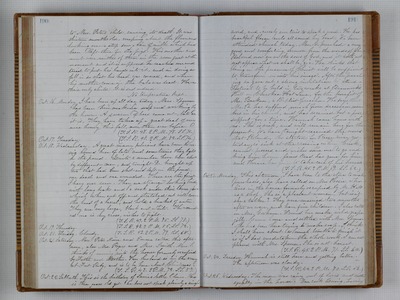 to Mrs. Reters' child, causing its death. It was thirteen months old, creeping about the floor, and looking over a step saw a can of milk which had been left there for the pigs. His mother and aunt were neither of them in the room just at the moment and it is supposed he reached over and tired to put his hands into it, and in doing so fell in so that his head was covered, and when his mother came in the babe was dead. He was their only child. It is sad indeed. No temperature kept. Oct. 16. Monday. I have been up all day today. Mrs. Spooner has been here making soap and working by the hour. A swarm of bees came out, late as it is. They have taken up a great deal of very nice honey this fall, more than ever before. (T.S.R. 48. 2 P.M. 78. S.S. 72.) Oct. 17. Tuesday. (T.S.R. 48. 2 P.M. 82. S.S. 74.) Oct. 18. Wednesday. A great many pelicans have been hovering round here of late and sometimes they light in the pond. Quite a number have been shot by different men, and tonight Dr. brought up two that had been shot and left in the pond, one dead and one wounded. These are the first I have ever seen. They are strange looking bird, with long beaks and a sack under their lower jaws which when cut off and stretched out will lower the head of a barrel, and hold a bucket of water. They are very large, black and white. The wounded one is very cross, wishes to fight. (T.S.R. 49. 2 P.M. 85. S.S. 78.) Oct. 19. Thursday. (T.S.R. 48. 2 P.M. 85. S.S. 72.) Oct. 20. Friday. Cloudy. (T.S.R. 53. 2 P.M. 79. S.S. 68.) Oct. 21. Saturday. Mrs. Peter Moore and Emma called this afternoon, also Mrs. Rogers and Mrs. Smith. Mrs. S. thinks of moving into the house formerly occupied by Father and Mother. Her husband is in the army at Fort Ruby, and is to be here about Christmas. (T.S.R. 48. 2 P.M. 72. S.S. 59.) Oct. 22. Sabbath. This is the birthday of Susie's little Elmer. He is three years old yet he does not speak plainly a single word, and scarcely ever tries to speak a word. He has beautiful flaxen curls all round his head. We have attended church today. Mr. G. preached a very good and comforting sermon from the words, of John, "Beloved now are we the sons of God, and it cloth not yet appear what we shall be, etc." He thinks that being in the presence of Christ will be sufficient to transform us into his image. After the preaching he gave out a strong invitation to attend a Festival to be held in two weeks at Brannock's Hall are Cherokee Hal Lane, for the benefit of Mr. Buckner, a Baptist preacher. He says that Mr. B. has suffered much from secession members in his church; and has received but a poor support for a time. Hannah came home with us. She is sick, and will remain here for the present. We have tonight received the news that Roland, who started for Reese river yesterday, is sick at the crossing on Dry Creek, cannot proceed and wishes some one to go and bring him home. James Reed has gone for him, and Horace has gone to take care of his horses. (T.S.R. 45. 2 P.M. 69. S.S. 62.) Oct. 23. Monday. This afternoon, I have been to the store to make purchases, also have called on Mrs. Hoxie, who lives in the house formerly occupied by Mr. Kett as a shop. She is a pleasant woman, but isn't she a talker? They were married two months after we were, and have five children. I also called on Mrs. Gorham. Found her make wild grape jelly. Came home and settled with Mrs. Spooner who had been here trying to make soap. I think I shall have about as much trouble to finish it as if I had undertaken the whole work. I am not pleased with Mrs. Spooner. She is not honest. (T.S.R. 45. 2 P.M. 71. S.S. 64.) Oct. 24. Tuesday. Hannah is still here and getting better. The afternoon was cloudy. (T.S.R. 44. 2 P.M. 70. S.S. 58.) Oct. 25. Wednesday. The morn was rainy out of doors and rather squally in the house. Our cook Quing, having