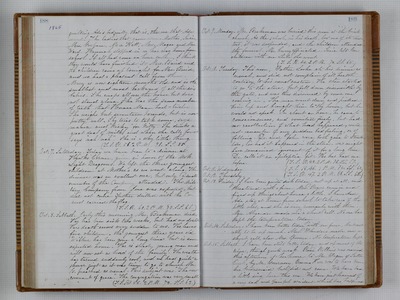 1865 quilting Ada's bed quilt that is, the one that Ada sewed. The ladies that came were. Mother, Susie, Mrs. Gorham, Mrs. Kett, Mrs. Magee and Mrs. Ward. Hannah stopped in on her way home from school. If all had come an hour earlier, I think they would have finished it. Mrs. Baird and the children came up tonight for Mr. Baird, and we had a pleasant call from them. Mary is now eighteen months old and is the smallest and most backward of all the six babies. She creeps all over the house but does not stand alone. She has the same number of teeth that Horace Mann had - twelve. She weighs but seventeen pounds, but is now pretty well. She tries to talk some, says mama and "Kicky" for kitty. She drinks a great deal of milk and when she calls for it says "nah-nah". She is a shy little thing. (T.S.R. 56. 2 P.M. 91. S.S. 85.) Oct. 7. Saturday. Today we have been to a dinner at Hawks' Corner, given in honor of the Mok. Light Dragoons. We left the three youngest children at Mother's as we went along. The dinner was an excellent one, but only a small number of the Company attended. The Military Company from Ione was expected, but did not come. Luther drilled with the Co. and carried the flag. (T.S.R. 60. 2 P.M. 80. S.S. 66.) Oct. 8. Sabbath. Early this morning Mr. Brakeman died. He has been sick two weeks, but had no doctor. His death seems very sudden to us. He leaves five children - the youngest three years old. Wilbur has been gone a long time but is soon expected home. He is steady young man and will now act as head of the family. The weather has turned suddenly cool, and we had quite a shower just as it was time to go to church. Mr. G. preached as usual. His subject was, "The new covenant of grace." The congregation was very small. (T.S.R. 55. 2 P.M. 72. S.S. 63.) Oct. 9. Monday. Mr. Brakeman was buried this noon at the brick church. As the school, in his death, lost one of its trustees, it was suspended, and the children attended the funeral. Mr. Curry officiated. Susie left her children with me while she went. (T.S.R. 44. 2 P.M. 72. S.S. 65.) Oct. 10. Tuesday. This noon, Father Locke ate his dinner as usual, and did not complain of ill health, contrary to his usual custom. He then started to go to the store, but fell down insensible by the gate, and was thus discovered by some one coming in. The men went down and picked him up and brought him to the house, but he would not speak. In about an hour, he came to consciousness, and vomited freely, but had no recollection of what had happened, could not remember of any sudden bad feeling, or of falling. Dr. and John were both gone to Stockton, so had it happened in the store, we might have remained ignorant of it for a long time. Dr. calls it an epileptic fit. He has had one before. (T.S.R. 42. 2 P.M. 76. S.S. 69.) Oct. 11. Wednesday. (T.S.R. 46. 2 P.M. 72. S.S. 61.) Oct. 12. Thursday. (T.S.R. 47. 2 P.M. 66. S.S. 63.) Oct. 13. Friday. I have been quite sick today, not up at all, and threatened with a fever. Mrs. Rogers came in and fixed up things about house a little. I have had Ada stay at home from school to take care of the little ones, and she is very womanly with them. Mrs. Alexander made me a short call. No one has kept the temperature today. Oct. 14. Saturday. I have been better today, with no fever, but not able to be up much. Mrs. Flanders made me a short call, also Mrs. Spooner. No temperature kept. Oct. 15. Sabbath. I have been still better today, and up most of the time, though quite weak. Rosa Robbins was married this afternoon at her home to Mr. Fagan of Sutter Creek, by Mr. Guernsey. Emma Kerr was to have been her bridesmaid but did not come. We have had a little sing here this eve. We have just learned of a very sad and painful accident which has happened