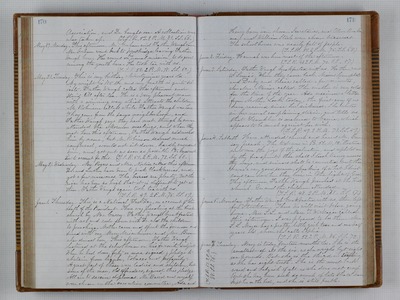 association, and Dr. bought one. A collection was also taken up. (T.S.R. 53. 2 P.M. 81. S.S. 66.) May 29. Monday. This afternoon, Mr. Gorham and Father Waugh came. Mr. Gorham went back to Woodbridge, leaving Father Waugh here. He comes on his usual mission, to do good among the youth here. He took tea with us. (T.S.R. 52. 2 P.M. 78. S.S. 62.) May 30. Tuesday. This is my birthday – twenty nine years old. My weight is 105 lbs. and my health is quite delicate. Father Waugh called this afternoon and staid till after tea. He is a very pleasant man with a winning way which attracts the children. Mr. Robinson called while Father Waugh was here. They come from the same neighborhood, and Father Waugh says they have met, though he never attended the Mormon meetings, and when they met here this afternoon, Father Waugh addressed him by name, but Mr. Robinson seemed much confused, would not sit down, hardly answered him, and got out as soon as possible. We know not how to account for this. (T.S.R. 50. 2 P.M. 78. S.S. 60.) May 31. Wednesday. Mrs. Rogers and Mrs. Norton called this afternoon. Dr. and Luther have been to pick blackberries, and got a few nice ones. The busies are plenty, but the river has been so high that it is difficult to get at them. Father Waugh again took tea with us. (T.S.R. 49. 2 P.M. 75. S.S. 59.) June 1. Thursday. This is a National Fast Day, on account of the death of the President. There was preaching at the brick church by Mr. Curry. Father Waugh breakfasted with us and rode down with Dr. and the children to preaching. Mother came and spent the forenoon and dined with me. Mary Misenhimer and Mrs. Brown also dined here. This afternoon, Father Waugh lectured at the school house on his favorite subject. When he had done, forty or more signed a pledge to abstain from liquor, tobacco and profanity. A great part of these were ladies and children, but some of the men, old offenders, signed this pledge. All are to receive diplomas. Mr. Baird and myself were chosen on the executive committee, Ada and Henry Curry were chosen Secretaries, and Olive Brake man and William Steele were chosen treasurers. The school house was nearly fell of people. (T.S.R. 50.2 P.M. 75. S.S. 63.) June 2. Friday. Hannah was here most of the afternoon. (T.S.R. 48. 2 P.M. 72. S.S. 57.) June 3. Saturday. Father Waugh breakfasted with us. He then went to Susie's. When they came back, Misses Campbell and Derby and Susie called a few minutes, also Mrs. Miner called. The weather is very cold for the time of the year. Ada received a letter from Mother Lock today, the first any of us have received since her sickness. She writes in her usual complaining strain, and tells us that Franklin is married to Carrie, which appears to be much against her with. (T.S.R. 49. 2 P.M. 71. S.S. 59.) June 4. Sabbath. Have attended church and heard Mr. Guernsey preach. The text was in Ps. 51. 11, 12. "Restore unto me the jogs of thy salvation, and uphold me by thy free spirit: then shall I teach transgressors thy ways, and sinners shall be converted unto thee". It was a very good sermon, speaking of what Christians can do when they live in the light of God. This afternoon, Father Waugh preached at the brick church. Drs and the children attended. (T.S.R. 48. 2 P.M. 68. S.S. 67.) June 5. Monday. Father Waugh breakfasted with us, then left for Stockton. There he will visit before going home. Mrs. S.L. and Mrs. T. W. Magee called this afternoon. I was pleased to see then. Mrs. S. L. Magee has a pretty little girl too and one-half years old, whom she calls Sophia. (T.S.R. 52. 2 P.M. 86. S.S. 73.) June 6. Tuesday. Mary is today fourteen months old. She is the smallest of all the six, as she weighs by eighteen pounds. But she is the third in seeing as she has eight teeth. She is the most backward and babyish of all as she does not creep. But she has been sick so much of late that I have kept her on the bed, and she is still feeble.