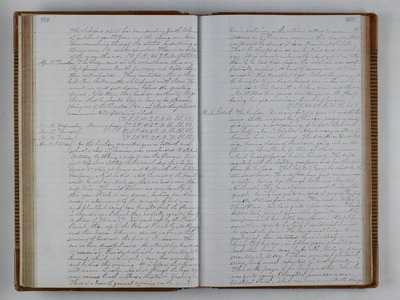 The Lockeford Anvil has been sending forth tokens of jubilant exultation, and the young men have been marching through the streets and stirring up Union men to make speeches. There is an eclipse of the moon this eve. (T.S.R. 46. 2 P.M. 65. S.S. 56.) Apr. 11. Tuesday. The Lodge met at the schoolhouse this eve but found more trouble for room and lights than they anticipated. They initiated two or three but Geo. Locke rather interfered with them. He went in and sat down before the meeting opened, told them they had no authority to go there, that he should stay as long as he pleased, (being one of the Trustees), &c., so that they did not commence till after nine o'clock. (T.S.R. 40. 2 P.M. 68. S.S. 55.) Apr. 12. Wednesday. Morning foggy. (T.S.R. 40. 2 P.M. 68. S.S. 60.) Apr. 13. Thursday. (T.S.R. 48. 2 P.M. 68. S.S. 60.) Apr. 14. Friday. (T.S.R. 42. 2 P.M. 70. S.S. 65.) Apr. 15. Saturday. As the birthday occurs this year on Sabbath and school is also in Session, was concluded to celebrate it today by taking a ride to see the flowers. But just before we started Luther concluded that he preferred to stay at home and drill with the Military Company, which he did. All the rest of the family went, and I can truly say that we had a very pleasant time. The wild flowers are very beautiful this year. Stock is very scarce, having been driven away or starved out by the drought of last year, and plentiful rains have brought forth the flowers in abundance. I think they are fully equal in beauty to those of 56 and 57. We went out by the Priest Ranch then up to the Roland House by Mr. Bragg's and then home. When we arrived we found three swarms of bees out, the first of the season. This eve we hear dreadful news. An attempt has been made to assassinate President Lincoln and Secretary Wm. Seward, which in Lincoln's care has succeeded, and he died this morning. It is hoped that Seward will recover. Lincoln was shot through the head by a man named Booth in Ford's theatre in Washington Thus in a time of general rejoicing are the great Union victories, is the nation called to mourn. O it seems as if were there one man in this country that could not be spared, it was President Lincoln. That he should die at such a time and in such a way, it is almost unbearable. And yet it is better than if he had died before the rebellion was effectually crushed. A band of assassins must be concerned in this dreadful deed. O that they may all be brought to justice. Seward was in his own house confined to his bed with a broken arm, and the men who stabbed him gained admittance on the plea of having brought medicine from his physician. (T.S.R. 45. 2 P.M. 76. S.S. 66.) Apr. 16. Sabbath. The birthday. Dr. is now forty two years old and Luther nine. Luther is a great boy of his age, weighing sixty five pounds and measuring four feet, three and one half inches in height. About many matters of business he is very forward. He does the entire milking having charge of three cows, going out on the plains on horse back for them on the dun mare, which he saddles and bridles himself. He drills regularly with the Military company and has the uniform form his horse. The Captain says he shall be the standard bearer. He and Ada have just commenced to cipher, having been through Colburn's Mental Arithmetic. They have also commenced Primary Geography, having had quite an idea of geography previously obtained from maps. They read in Willson's Third Reader, but he is quite a poor reader. They have kept a daily journal since New Year's day, and he compares with but little assistance. But I have something to write of which I could wish I might be spared the pain. He has several times, to our great grief, been detected by us in stealing and lying. O if his eye, in future years, should ever read these lines, may he be able, truly and conscientiously to say, "Those were my childish errors, long since repented of and forsaken." This is the prayer of his loving mother. When he was quite young, I thought I never saw a more truthful child, What can have wrought the change