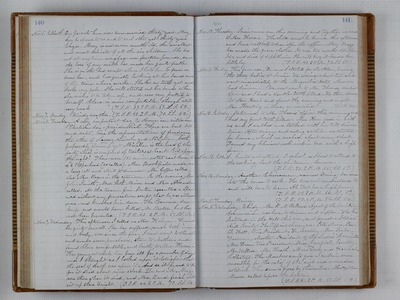 Nov. 6. Sabbath. Our parents have now been married thirty years. May they be spared to us and to each other yet thirty years longer. Mary is now seven months old, the smallest and most delicate of all the six children. She has not at any time weighed over fourteen pounds, and the loss of my milk has made her quite feeble. She is on the bed except when I hold her to feed or dress her, and lies quietly looking at her hands most of the time when awake. She has no teeth yet and looks very pale. She will stretch out her hands when she wishes to be taken up, and coos very prettily to herself. Clara is more comfortable, though still very weak. (T.S.R. 29. 2 P.M. 69. S.S. 63.) Nov. 7. Monday. Windy weather. (T.S.R. 48. 2 P.M. 70. S.S. 63.) Nov. 8. Tuesday. A very important day to American citizens. Election day presidential. There are but two candidates, one the representative of freedom, the other of slavery. Lincoln and McLellan, both professedly Union, yet McLellan is the head of the party which is composed of traitors at heart. God speed the right! There were 101 union votes cast here to 42 copperhead (so called). Mrs. Brookfield made us a long call and staid to dinner. Mr. Coffee called, also Mrs. Rogers in the afternoon. In the evening Mrs. John Smith, Mrs. Seth Miner and Mrs. Alexander called. At the tavern, Jim. Barton assaulted a Spaniard without any provocation except that he was a Union man, and knocked him down. The Spaniard drew a knife and would have killed Mr. Barton, had he not been prevented. (T.S.R. 48. 2 P.M. 67. S.S. 62.) Nov. 9. Wednesday. This afternoon I called on Mrs. Holman. Found her quite unwell. She has suffered much both in mind and body, ever since the fire. I next went to the store and made some purchases, then to Mother's and found Clara comfortable, and lastly to Mrs. Harrer's. Her youngest child has been ill for a number of days and I thought as I looked upon it tonight that the seal of death was upon it. And so it proved to be, for it died about nine o'clock. Dr. and Mrs. Bragg were there when it died, and Mrs. B. and Josiah will sit up there tonight. (T.S.R. 44. 2 P.M. 70. S.S. 64.) 1864 Nov. 10. Thursday. Susie came over this morning and together we went to Mrs. Harrer's. The child must be buried this afternoon and Susie will help to dress it for the coffin. Mrs. Bragg has made the grave clothes. It was two months older than Ida and died of diphtheria. She will bury it beside her little boy. (T.S.R. 40. 2 P.M. 73. S.S. 65.) Nov. 11. Friday. This forenoon, Dr. and I started for Stockton, leaving the three babies at Susie's. We arrived about two and went immediately to the Magnolia Hotel, where we had dinner. We next went to Mr. Thomas' dentist office and I had a double tooth filled. We then drove to Mrs. Kerr's and spent the evening and night. Mrs. Keating is there, an invalid. (T.S.R. 44.) Nov. 12. Saturday. Returned to Mr. Thomas' office this morning and had my front teeth filled. Mrs. Kerr rode in with us and I walked and talked with her till dinner time. After dinner and resting awhile, we started for home, which we reached about seven o'clock. Found my Chinese cook sick in bed with a high fever. Nov. 13. Sabbath. Could not attend S. school, as I had to attend to the cooking. Sent the children, however. (T.S.R. 38. 2 P.M. 65. S.S. 59.) Nov. 14. Monday. Another Chinaman, named Quing, has come into the house to cook. He does not understand it, and will have to learn. Ah Teet has a high fever. (T.S.R. 50. 2 P.M. 64. S.S. 59.) Nov. 15. Tuesday. Rainy. (T.S.R. 50. 2 P.M. 54. S.S. 54.) Nov. 16. Wednesday. Windy. Mr. R. N. Bellows, Agent of the Sanitary Commission, was here to dinner and supper. He has lectured in the Hall this eve, and formed a Soldiers' Aid Society. The Offices chosen are - Peter Moore, Pres. F. Kett, Vice President. Dr., Secretary - Geo. Locke, Treasurer, Mother - President of the Ladies' Committee Mrs. Doom, Vice President, Miss Campbell, Secretary, Mr. Wallace, Mr. Heath, Miss Derby and Hannah, Collectors. The Members auto give a certain sum monthly for the relief of the sick and wounded soldiers. This sum is fixed by themselves. Mr. & Mrs. Moore called before the lecture. (T.S.R. 41. 2 P.M. 60. S.S. 54.)