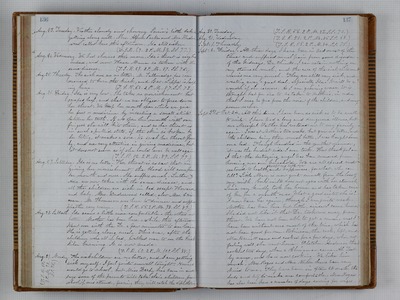 Aug. 23. Tuesday. Weather cloudy and showery. Susie's little babe is getting along well. Mrs. Alfred Parker and Mrs. Underwood called here this afternoon. Ida still sicker. (T.S.R. 69. 2 P.M. 83. S.S. 77.) Aug. 24. Wednesday. We had showers this morn. Ida's throat is very bad indeed, and now Horace Mann is taken with the some disease. (T.S.R. 69. 2 P.M. 87. S.S. 76.) Aug. 25. Thursday. The sick ones are no better. Mr. Sallmadge has commenced to burn the brick, and Geo. Lippe is helping him. (T.S.R. 62. 2 P.M. 87. S.S. 73.) Aug. 26. Friday. Ida is very low. She takes no nourishment but scraped beef, and that we are obliged to force down her throat. We keep her mouth open while we give her food or medicine by inserting a small stick between her teeth. If we open her mouth with our fingers she will bite them, and as her throat is in such a putrid state, if the skin is broken by her biting, it makes a sore. We swab her throat freely, and are very attentive in giving medicine, but it does not seem as if she could ever be well again. (T.S.R. 52. 2 P.M. 89. S.S. 79.) Aug. 27. Saturday. Ida is no better. Her throat is so saw that in giving her nourishment, the blood will come from her mouth and nose. She suffers much. Luther & Ada are now taken with the same disease, and all the children are sick in bed except Howard and baby. Mrs. Underwood called, also Mrs. Crisman. Mr. Thomason was here to dinner and supper. Weather very warm. (T.S.R. 55. 2 P.M. 98. S.S. 89.) Aug. 28. Sabbath. Ida seems a little more comfortable - the others no better. Mother has been here a while this afternoon. Went over with the Dr. a few minutes to see Susie. She is getting along nicely. This eve, after the children were all in bed, walked over to see the brick kiln burning. It is now made. (T.S.R. 60. 2 P.M. 100. S.S. 88.) Aug. 29. Monday. The sick children are no better, and I am getting sick myself. I feel quite unwell tonight. Howard would go to school, but Miss Darby has been in and says some of the parents will take their children from school, if ours attend, fearing they will catch the diphtheria. Aug. 30. Tuesday. (T.S.R. 56. 2 P.M. 83. S.S. 70.) Aug. 31. Wednesday. (T.S.R. 50. 2 P.M. 85. S.S. 68.) Sept. 1. Thursday. (T.S.R. 55. 2 P.M. 84. S.S. 75.) Sept. 2. Friday. All these days I have been in bed most of the time and suffered much pain from some disorder of the kidneys, Dr. thinks. I can retain nothing on my stomach much, and the care of the sick children wearies me very much. They are still very sick, and wasting away a great deal, especially Ida. It will be a wonder if she recovers. As I am growing worse, it is thought best for me to be taken to mother's, in order that I may be free from the noise of the children, and may sooner recover. Sept. 3rd to Oct. 24. All this time I have been so sick as to be unable to write. I have had a long and dangerous illness, but our Merciful Father has restored me to my family again. I was at Mother's two weeks, but grew no better, and the children being then much better, I was brought home on a bed. Though handled in the gentlest manner, it was the hardest ride I ever took. How thankful am I that the destroying angel has been removed from hovering over our household. We are all spared and restored to health except ours little one and happiness, for what, who can tell? Little Mary is now quite unwell from the loss of my milk. Cows' milk does not agree with her stomach. Susie very kindly took her home and has taken care of her for a month or so. What a good sister she is! I now have her again, though I am quite weak. Mother has been here but little, since I came home. She did not like it that Dr. took me away from there. We have not been able to get a nurse, and I have been without one most of the time, which has not been good for me. Robinson, the cook, left, and Mrs. Barnett came and cooked for a few days, when not feeling well, she went home. Fletcher Anderson then cooked two days, when a Chinaman came, Ah Teet by name, and he is now cooking. We like him much. Mrs. Rogers and Mrs. Norton have been very kind to me. They have been in often to make the beds and try to make me comfortable. Mrs. Rogers has also been here a number of days sewing for wages.