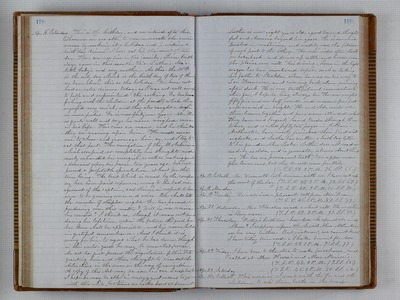 Apr. 16. Saturday. This is the birthday, and we intend after this, whenever we are able, to commemorate the anniversary by making it a holiday and providing a birthday dinner. I have sat up the most of the day. There are now five in the family, whose birthdays come in this month. Dr.'s Luther's - Ida's - little baby's and my mother's. As this - the 16th is the only day which is the birthday of two of them we have closen this as the holiday. We have not had an extra dinner today, as I was not well enough to help and superintend the cooking. Dr. has been fishing with the children at the pond, which they enjoyed very much, and they also caught a dozen or more fishes. Dr. is now fortyone years old. He is quite well and says he never weighed more in his life. His cares are many, and he thinks they are wearing upon him. He needs someone to cheer and encourage him on, and I try to act that part. The navigation of the Mokelumne which occupied so completely his thoughts and nearly exhausted his energies, as well as making quite a demand upon his purse, two years ago, has not proved a profitable speculation, at least for the time being. The boat which is owned by the company has never paid expenses, owing to the bad management of the captain, and things in respect to her seem to be growing worse and worse. Who shall tell the number of sleepless nights Dr. has passed in pondering over this matter? Will he ever receive his reward? I think so, though it may not come during his lifetime, yet in the future the good he has done shall be appreciated, and his name held in grateful remembrance. And I think it is wrong for him to regret what he has done, though in this world's goods he may be somewhat poorer. An act has just passed the Legislature of this State granting him and others the right to clear out the obstructions in the river in the way of navigation. A copy of this Act may be seen in our Scrapbook. I hope he may be able in energy and means to go on with this work, but times are rather hard at present. Luther is now eight years old, a good boy, and thoughtful and observing beyond his years. He is much interested in machinery, and readily sees the fitness of each part to the others. He now rides after stock on horseback, and drives up cattle and horses from the plains, very well. His driving a horse in the light wagon has been mentioned before, such as taking his father to Stockton when he was on his way to San Francisco, and coming back alone, arriving after dark. He is very truthful and conscientious thus far, I hope he may always be. He now weighs fifty five and one-half pounds and measures four feet and one inch in height. He and Ada recite all their lessons together and have never attended school. They have read Sargents' Second Reader through three times, and recited fifty two pages in Colburn's Arithmetic, have nearly finished their first writingbooks, and Luther has written a birthday letter to his grandmother Locke. Luther does not read so readily as Ada, and is generally slower about thinking. He has six permanent teeth, two upper and four lower ones, but they do not come prettily. (T.S.R. 50. 2 P.M. 76. S.S. 66.) Apr. 17. Sabbath. Mr. Wermuth took dinner with us. I have sat up the most of the day. (T.S.R. 48. 2 P.M. 72. S.S. 63.) Apr. 18. Monday. (T.S.R. 42. 2 P.M. 80. S.S. 70.) Apr. 19. Tuesday. Have received a pleasant call from Mrs. Doom. (T.S.R. 46. 2 P.M. 87. S.S. 77.) Apr. 20. Wednesday. Mrs. Flanders made a short call. The weather is very warm. (T.S.R. 50. 2 P.M. 91. S.S. 81.) Apr. 21. Thursday. Mother's birthday - how does she spend it, and where? I suppose upon the broad, blue Attantic, on her way hither. But just now, we cannot know. I have today trimmed a Shaker bonnet for Ada. (T.S.R. 52. 2 P.M. 91. S.S. 77.) Apr. 22. Friday. I have been to the store to make purchases, and called at Mrs. Harrer's and Mrs. Miner's. (T.S.R. 48. 2 P.M. 79. S.S. 63.) Apr. 23. Saturday. (T.S.R. 45. 2 P.M. 80. S.S. 64.) Apr. 24. Sabbath. This morning, I went with the Dr. and the children to see them bathe in the pond.