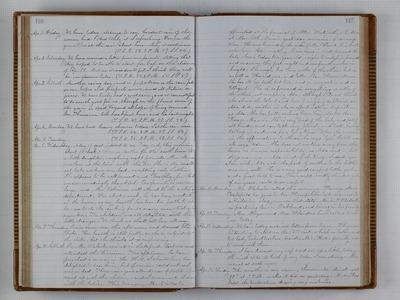 Apr. 1. Friday. We have today, strange to say, hardest rain of the season had. And truly it is refreshing. Few are the grumblers at the rain about here. May it continue. (T.S.R. 52. 2 P.M. 59. S.S. 54.) Apr. 2. Saturday. We have received a letter from our parents, stating that they hoped to be able to start for Cal. on the steamer of Apr. 1st. But as it was doubtful, I think they will be one steamer later. (T.S.R. 50. 2 P.M. 65. S.S. 57.) Apr. 3. Sabbath. Another rainy day, and in proportion as the rain falls so our hopes and prospects river, and all Nature rejoices. We have truly had a good rain, and it cannot fail to do much good for us, though on the plains some of the grain is dead, beyond all hope of being received. Geo. Thomason took breakfast here, and tea last night. (T.S.R. 49. 2 P.M. 57. S.S. 52.) Apr. 4. Monday. We have had heavy showers today. Let the rain come. (T.S.R. 44. 2 P.M. 59. S.S. 54.) Apr. 5. Tuesday. (T.S.R. 36. 2 P.M. 62. S.S. 54.) Apr. 6. Wednesday. A day of great interest to us. Very early this morning, about 1 o'clock, became mother for the sixth time to a little daughter, weighing eight pounds. Mrs. Miner was here at the time with the Dr. She is the smallest babe we have ever had, excepting only Luther. She appears to be well formed and healthy, for which we are exceeding by thankful. Our family is now very large, and Mr. Robinson will attend to the cooking department. For about a week, he has been constantly in the house, as my health has been too feeble to allow me to do the cooking for so many men twelve in number. The children are all delighted with the little strange. We think we shall call her Mary. Apr. 7. Thursday Susie came over this afternoon and dressed the babe. Her health is still feeble, as she is subject to the chills, but she thinks it is improving. Apr. 10. Sabbath. Rev. Mr. Blakeslee arrived in Lockeford last eve and attended the Division. This afternoon, he has preached a sermon in the Hall. I should have been delighted to hear him, but of course could not as I was in bed. There was a good attendance of people. Dr. went up with the children, and I remained alone with the babies. This forenoon, Mr. Blakeslee officiated at the funeral of Allen Wentworth, who died at Mr. Seth Miner's, yesterday morning, of consumption. He was buried by the side of Mr. Poland, his brother-in-law. After meeting, Susie came in and dressed the babe. Ida is today two years old, weighs twenty five pounds and measures two feet, eight and one fourth inches in height. She weighs less than either of the others, but is as tall as Howard was, and taller than Horace Mann. She has all her teeth but two, and is very active and intelligent. She is as forward in everything as either of the others not excepting Ada, although I do not think she shows the talent and love of singing as plainly as Ada did, neither is she so affectionate in disposition as Ada. She has pretty curling brown hair, darker than Horace Mann's. She is very fond of the baby and pets of all kinds, and can talk very plainly and well, having talked in sentences for a long time. When she answers in the affirmative to others, she says "yes," but to me she says "ma'am." She does not venture away from the house on her own responsibility, as Ada used to, but stays near me or Ada most of the time. Indeed, now I am sick, Ada acts the part of mother to the little ones, very well. She is a very good, careful little girl, and a great help to me. One would hardly think a girl of six years, could be so useful. Apr. 11. Monday. Mr. Blakeslee called this morning. He says Miss Wakefield has gone to New Hampshire to be married to as Unitarian clergyman in that state. Mr. W. P. Blakeslee is practising law in Oakland, and living in his family. Apr. 12. Tuesday. Mrs. Magee and Mrs. Flanders have called to see me today. Apr. 13. Wednesday. We have today received letters from home. They were intending to start on the 13th into, which is today, and two lady school teachers, besides Mr. Hett's family are to come with them. Apr. 14. Thursday. I have dressed myself and sat up a little today, the ninth after the birth of my babe. I am stronger than usual at such times. Apr. 15. Friday. The weather is very warm, thermometer standing at 90º at 2 P.M. as also it did on yesterday. No one has kept the temperature during my sickness.