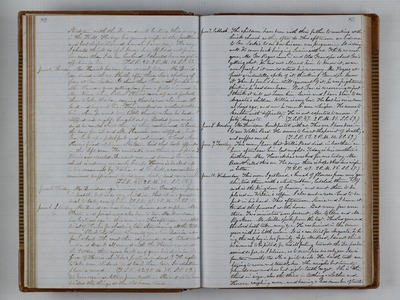 Stockton with the Dr. and will lecture this eve, in the Hall. He says his young wife is the prettiest and best dispositioned woman I ever saw. He says I should think so if I know her. If I did not fancy her more than I do her husband, I should have no great affection for her. (T.S.R. 48. 2 P.M. 80. S.S. 63.) June 4. Thursday. Mrs. Herrick has been here at work today. Mr. David. son dined with us. Shortly after there was a shooting affray at Geo. Locke's. It seems that Geo. with Josiah and Mr. Hanson were getting hay from field claimed by Mr. Nims, when Robert Harris came up and forbade them to take the hay, saying that he now claimed the land, and hay was his. They worked on without noticing him, when he went to a little shanty where he had stopped over night, brought out a loaded gun and said he would shoot them if they continued to load the hay. Josiah and Mr. Hanson now stopped, but Geo. took up a pitchfork and continued to load when Harris fired at him. Sixteen bird shot took effect in the left arm. The constable was then sent for and Harris was arrested. Dr. went over and dressed Geo.'s arm which is not very seriously hurt. Harris is backed up in his meanness by, Vance and Chill, a concoction of meanness sufficient to do any dirty dead conceivable. (T.S.R. 48. 2 P.M. 85. S.S. 65.) June 5. Friday. Mr. Davidson again dined with us. Grandpa improves in health, but is so very childish, that it is a great trial to take care of him. (T.S.R. 47. 2 P.M. 78. S.S. 61.) June 6. Saturday. Mr. Davidson was here to dinner and supper. Mr. Foster and Josiah were also here to tea, Mr. Davidson has lectured again this evening. This afternoon was the trial of Harris for shooting Geo. After hearing all the testimony Clark told them he would give his decision at four o'clock. The court then adjourned and Clark went out and drank all around with the Harris crowd at the tavern, then came back and gave his decision in favor of Harris. Isn't he a justice indeed? He ought to take some students and teach them law. In addition I have to record. (T.S.R. 43. 2 P.M. 76. S.S. 59.) We have received letters from mother. She and sister have divided the things at the old home stead. June 7. Sabbath. The children have been with their father to meeting at the brick church as they often do. This afternoon we rode over to Geo. Locke's to see how his arm was progressing. It is doing well. We came back bringing Susie with us. While we were gone, Mr. Geo. Rogers came in and told Grandpa about Geo.'s getting shot. We had not allowed him to know it, as we were fearful it would retard his recovery. Mr. Rogers at first accidentally spoke of it, thinking Grandpa knew it. When he found him still ignorant of it, he was frightened thinking he had done harm. But Geo. is recovering so fast I think it will not harm him. Susie and I have been to see Augusta's children. Willie is very low. He lost his voice several days ago, and now he cannot even whisper. He seems to breathe with difficulty. He is not expected to recover. I pity Augusta. (T.S.R. 47. 2 P.M. 81. S.S. 69.) June 8. Monday. Mr. Davidson breakfasted with us. This eve I have been in to see Willie Read. He seems to lie at the point of death, and suffers much. (T.S.R. 53. 2 P.M. 84.S.S. 69.) June 9. Tuesday. This morn I learn that Willie Read died in less than an hour after I saw him last night. Today is his mother's birthday. Mrs. Herrick has washed for me today. Mr. Prescott called this eve. He says there is hope that his wife is better. (T.S.R. 49. 2 P.M. 86. S.S. 67.) June 10. Wednesday. This morn I gathered a bunch of flowers from my garden, tied them with a white ribbon, labeled them "Of such is the kingdom of heaven," and sent them to be placed on Willie's coffin. I also sent a rose bud to be put in his hand. This afternoon, Susie and I have attended the funeral at the house. But very few were there. Two ministers were present, Mr. Willer and Mr. Buckner. Mr. Willer spoke from the text, "The Lord gave, and the Lord hath taken away" etc. He was buried in the same grave with his little cousin. It is a core trial for Augusta, he being the only boy in her family. As for Mr. Read, I do not think he is much to be pitied, for his ill feeling towards the Dr. has been received so far, as I believe, as to sacrifice his only son Ida is fourteen months old. She is quite sick. He double teeth are trying to come and trouble her. She weighs but twenty pounds now and has but eight teeth as get. She is the third in size, also the third in teething Luther and Horace weighing more, and having a less number of teeth.