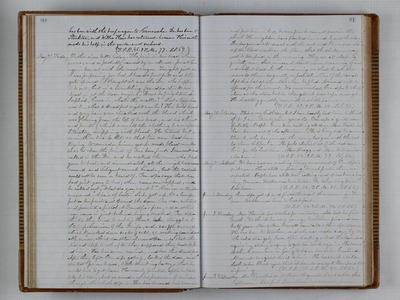 has been with the beef wagon to Camanche. Dr. has been to Stockton, and Willie Herr has returned home. His mother needs his help in the garden and orchard. (T.S.R. 46. 2 P.M. 77. S.S. 69.) May 29. Friday. Father is no better today. The pain in his head is very severe, and is probably caused by an abscess. Josiah has again been out with the meat wagon. Tonight, just as I was preparing for bed, I heard a foot fall and the gate opened. I thought it was the Dr. who happened to be out, but in a twinkling Grandpa stuck his head in at the door saying, “Don't be frightened." I replied," Come in, what's the matter?" But when he was in, what a dreadful sight was he! His bald head and grey hair were streaked with the blood which was flowing from the top of his head, and his shirt and pants (which were all the clothing he wore) were literally dripping with blood. He stood but a minute or two to tell us that two men had been trying to murder him, yet he made blood marks so as to show the prints of his bare feet. I am out and called in the Dr. and he waked the men who had gone to bed, and immediately all the neighbors were roused and diligent search made, but the rascals could not be seen or heard of. Grandpa says that he had just gone to bed, when some one rapped, and he called out, "What do you want?" A nice outside answered, "A pair of boots." So he got up, lit a lamp, put on his pants and opened the door. One man entered and pointed a pistol at Grandpa's face, and another man came in just behind him, masked. Grandpa thinks they tried to cut his throat, but he struggled to obtain possession of the knife, and a scuffle ensued which knocked down sacks of salt, &c. making considerable noise, which doubtless alarmed them, so that they did not stop to rob after they supposed they had killed him. He has seven wounds, and has had dreadful. After they left, Grandpa got up, locked the door, and started for our house, little thinking he says, that he could live to get here. He nearly fainted after he had told his story, but we wonder at his presence of mind through the whole affair. Dr. has dressed his wounds and put him in bed, but we fear he cannot survive the shock. The neighbors have flocked in, and heard the story Dr. has gone out to search with the rest, and I have scoured up the blood marks on the floor, that the children may not be terrified in the morning. They are all sleeping quietly now, their innocent hearts never dreaming of such a dreadful dead. In the morning we shall break the news to them as gently as possible. One of the rascals left his hat at the store when he fled. A reward will be offered for their arrest. We never wished Grandpa to sleep alone at the store but he thought it was safe enough. He is resting quietly now, with but little pain. (T.S.R. 47. 2 P.M. 84. S.S. 71.) May 30. Saturday. This is my birthday, but I have hardly had time to think of it. I am twentyseven years old. Grandpa is quite comfortable. People have been calling all day. Mrs. Foster has been here most of the afternoon. She is very sad because Frank, who has joined the army, has gone with the rest to Lower California. She feels almost as if she had seen him for the last time. Mrs. Bragg and Mrs. Wilson have also been in. (T.S.R. 54. 2 P.M. 79. S.S. 64.) May 31. Sabbath. We have had no meeting today on account of Grandpa's sickness. He is still improving, much faster than we expected. People have still been calling, and it has been a busy day. Truman Walker was here to tea. He is hunting for a lost horse. (T.S.R. 54. 2 P.M. 81. S.S. 62.) June. 1. Monday. Grandpa got up and fixed the mail this morning. Truman Walker was here to breakfast. (T.S.R. 50. 2 P.M. 78. S.S. 66.) June 2. Tuesday. Mrs. Herrick has washed for me today. Ada lost her first tooth. We think her very young, less than five and one half years. Mr. & Mrs. Prescott have called this afternoon. He has been to Washoe, and she was made crazy by it. She acted strangely here, often darting out at the door, and requiring strong urging to get her back again. She seems to think someone is going to harm her or her husband. It must be a great trial to him. She had such a wild look to her black eyes, that it haunts me yet, Grandpa is still improving. (T.S.R. 45. 2 P.M. 82. S.S. 64.) June 3. Wednesday. Mrs. Cynthia and Mrs. Augusta Read called this afternoon. Rev. J. A. Davidson has arrived from