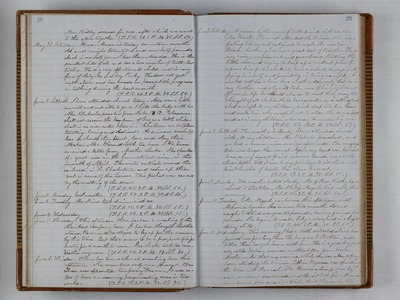 Mrs. Ridley ironed for me, after which we went to the store together. (T.S.R. 50. 2 P.M. 85. S.S. 69.) May 31. Saturday. Horace Mann is today seventeen months old and weighs twentyone and one half pounds, which is one half pound less than Ada did. He is the smallest child of all, and has a less number of teeth, but twelve. He is a very affectionate child, and is very fond of baby Ida and dog Pinky. He does not yet walk alone and has made no perceptible progress in talking during the past month. (T.S.R. 48. 2 P.M. 82. S.S. 62.) June 1. Sabbath. I have attended church today. Ada was a little unwell and not able to go, so I left the baby with her. Mr. Blakeslee preached from Luke 17, 17. "Whosoever shall not receive the kingdom of God as a little child shall in no wise enter there in. "Children are helpless. trusting - loving and obedient. As sinners are helpless so should they trust, love and obey their Maker. Mr. Barnett took tea here. We have received a letter from Mother Locke. She speaks of a great rise in the Connecticut river, in the month of April. The water entirely covered the railroad in So. Charlestown and came up three feet in some of the houses. This freshet was caused by the melting of the snow. (T.S.R. 45. 2 P.M.82. S.S. 62.) June 2. Monday. Cool weather. (T.S.R. 50. 2 P.M. 72. S.S. 60.) June 3. Tuesday. Mr. Nirons took dinner with us. (T.S.R. 50. 2 P.M. 80. S.S. 65.) June 4. Wednesday. (T.S.R. 52. 2 P.M. 88. S.S. 75.) June 5. Thursday. This afternoon there has been a meeting of the steamboat company here. It has been thought that the steamer Pert would be obliged to lay up for the summer by this time. But there seems to be a prospect of high water for a month to come. Geo. Locke took tea here. Weather very warm. (T.S.R. 54. 2 P.M. 98. S.S. 80.) June 6. Friday. There has been a church meeting here this afternoon. Six members only were present. Bro, Doom was appointed temporary Deacon. It was noted to have an evening prayer meeting once in two weeks. (T.S.R. 56. 2 P.M. 94. S.S. 70.) June 7. Saturday. A mason by the name of Wells dined with us, also Mr. Heath. I have not attended the Division this eve, feeling too much fatigued to make the exertion. Horace, brother, gives me a great deal of trouble. He is very noisy, unpleasant and quarrelsome, troubling the little ones and trying to keep up a constant furs. If I reprove him for his conduct, he is insolent, always justifying himself and persisting in being naughty. I would not have him here another day, only that he is my brother, and who will take care of him, if I do not? If ever in life he should chance to read this, may the thought of all the trouble he has caused me in setting such a bad example to my children, sink deep into his heart and make him very careful not to allow the same bad conduct in any children who may be under his care. (T.S.R. 53. 2 P.M. 83. S.S. 67.) June 8. Sabbath. The weather is cloudy. I have attended church with all my children. Mr. Blakeslee preached, and we had a communion service afterwards. The congregation was larger than usual. Again my heart was pained because my dearest friend sat not beside me at the Lord's table. Will it ever be my privilege to sit there with him? Searcher of hearts, thou alone knowest. (T.S.R. 57. 2 P.M. 78. S.S. 65.) June 9. Monday. The weather is still cloudy. Mr. & Mrs. Ridley have moved to Stockton, Mr. Philip Megerle died early this morning. (T.S.R. 56. 2 P.M. 76. S.S. 64.) June 10. Tuesday. Mr. Megerle was buried this afternoon with Masonic honors. Ida is now two months old and weighs twelve and one quarter pounds, having gained two pounds. She begins to make baby noised, and is a bright strong child. (T.S.R. 44. 2 P.M. 80. S.S. 65.) June 11. Wednesday. This morning I had a tooth extracted which has pained me for a long time. Dr. has gone to Stockton, and Willie Kerr has gone home with him. He is a good boy, and very active. We have received another letter from home. Mother writes that one evening, while she was absent from home attending the Division, Alice Ryerson was spending the time with Hannah. The Kerosene lamp was by some accident overturned, and the oil took fire. It must have been a poor quality of oil. As it slayed up, the