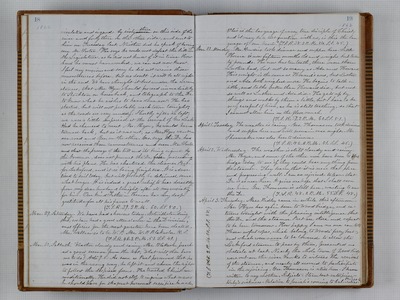 circulated and signed by sixty three on this side of the river and forty three on the other side, and sent to him on Tuesday last. Neither did he speak of having seen Mr. Foster. He says he could not defeat the bill in the Legislature, as he did not know of it in time. How hard he must have worked, we can not now know. I feel very anxious and sorry he did not receive those remonstrances before, but no doubt it will be all right in the end. We have thought it best under the circumstances, that Mr. Hyer should proceed immediately to Stockton on horseback, and telegraph to the Dr. to know what he wishes to have done now. He has started, but will not probably reach town tonight, as the roads are very muddy, shortly after he left, we were a little surprised at the arrival of Geo. Locke. Had he chanced to meet Mr. Hyer, he would have turned back, but so it was not, as Mr. Hyer went on one road and Geo. on the other Geo. says the Dr. has now received those remonstrances and seen Mr. Foster, and that the passage of the bill and its being signed by the Governor, does not prevent the Dr. from proceeding with his plans. He has chartered the steamer Pert for Lockeford, and it is being freighted. It is advertised to sail today, but will probably be detained some. what longer. It is indeed a great relief to hear directly from my dear husband tonight after all my anxiety for him. Our kind Father in Heaven has my deep gratitude for all his favors to us all. (T.S.R. 39. 2 P.M. 60. S.S. 50.) Mar. 29. Saturday. We have had showers today. Notwithstanding this, we have had a good attendance in the Division, and officers for the next quarter have been elected, Mr. Wallace is to be W.P. Mr. W. P. Blakeslee, R. S. (T.S.R. 42. 2 P.M. 51. S.S. 49.) Mar. 30. Sabbath. Weather cloudy and rainy. Mr. Blakeslee preached a good sermon from the text, "What will then have me to do?" Acts. 9. 6. As soon as Paul perceived that he was in the wrong way, he left it and chose the right to follow the despised Jesus. He trusted Christ unconditionally. He did not stop to inquire what reward he should have for the great personal sacrifice he made. This is the language of every time disciple of Christ, and it may be a test question with us, is this the language of our heart? (T.S.R. 38. 2 P.M. 54.S.S. 45.) Mar. 31. Monday. Mr. Hendrix took dinner and supper here. Little Horace is now fifteen months old and weighs but twenty pounds. He now has ten teeth, three more than Luther had, but not so many as Ada and Howard. His weight is the same as Howard's was, but Luther and Ada both weighed more. He begins to talk a little, and talks better than Howard did, but not so well as Luther and Ada did. He gets up by things and walks by them a little, but I have to be very careful of him, as he is still teething, so that I cannot allow him on the floor much. (T.S.R. 37. 2 P.M. 60.S.S. 51.) April 1. Tuesday. The weather is rainy - Geo. Thomason took dinner and supper here and will remain over night Mr. Shoemaker was also here to dinner. (T.S.R. 42. 2 P.M. 51. S.S. 46.) April 2. Wednesday. The weather is still cloudy and rainy. Mr. Hyer and some of the other men have been to Woodbridge today to see if they could hear anything from the steamer. They learn that it is near that place and progressing well. I am so rejoiced to learn that Dr. is so near here. It gives me hope that I shall soon see him. Geo. Thomason is still here, waiting to see the Dr. (T.S.R. 48. 2 P.M. 55. S.S. 48.) April 3. Thursday. Mrs. Ridley came in awhile this afternoon. Mr. Hyer has again been to Woodbridge, and returns tonight with the pleasing intelligence that the Dr. and the steamer Pert are there and expect to be here tomorrow. How happy I am no one can tell. Those awful ropes, which belong to Woods' ferry boat, and which were never to be lowered to allow the Lockeford steamer to pass by them, presented no obstacle at last. Nearly the whole town of Woodbridge were out on the river banks to witness the arrival of the steamer, and nearly all seemed to participate in the rejoicing. Geo. Thomason is still here. I have written to my mother. Subjects Steam boat enterprise. Baby's sickness. Relative to Josiah's coming to Cal. pieces of calico.