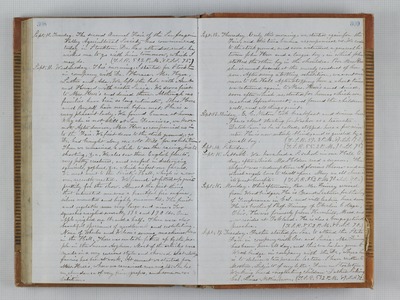 Sept. 10. Tuesday. The second Annual Fair of the San Joaquin Valley Agricultural Society has commenced today in Stockton. Dr. has attended and he wishes me to go with him tomorrow, which I may do. (T.S.R. 50. 2 P.M. 88. S.S. 75.) Sept. 11. Wednesday. This morning, I started for Stockton in company with Dr. Horace, Mr. Hyer, Luther and Ada. We left the babe with Aunt and Howard with sister Susie. We drove first to Mrs. Herr's and dined there. Although our families have been so long intimate, Mrs. Herr and myself have never before met. She is a very pleasant lady. We found Emma at home. Why she is not still at San Francisco, we know not. After dinner, Mrs. Herr accompanied us into the Fair. We first drove to the stock ground, as Dr. had brought along our colt "Bill" for exhibition. There we remained a while to see the racing pistol shorting, etc. We also saw there English ferrets, very pretty creatures, and useful in destroying squirrels, gophers, etc. which in fest our farms. We next went to the Society's Hall, which is a new one, recently erected. We found it fitted up quite prettily for the show. Almost the first thing that interested me was a beautiful fire engine, silver mounted and highly ornamented. The first and vegetables were very large and nice. Two squashes weighed severally 172 and 190 lbs. One apple weighed one lb. and a half. There were also beautiful specimens of needlework and crotcheting. None of Wheeler and Wilson's sewing machines were in the Hall. There was one table fitted up by the people in the Insane Asylum. Most of the articles were made in very curious style and showed that strange fancies had been at work. At sunset we started for Mrs. Kerr's, where we remained over night. She has an abundance of very fine grapes, and some on exhibition. Sept. 12. Thursday. Early this morning, we started again for the Fair, and this time Emma accompanied us. We rode to the stock ground, and soon witnessed a quarrel between John Kerr and a larger boy, in which John stabbed the other boy in the shoulder. Poor Mrs. Kerr she is much pained at the unruly conduct of her son. After seeing a trotting exhibition, we went one more to the Hall after stopping here a short time we returned again to Mrs. Kerr's and dined, soon after which we started for home, which we reached before sunset, and found the children well, and all things quiet. Sept. 13. Friday. E. C. Norton took breakfast and dinner here. He is about starting for Washoe as a teamster. "Dutek Sam" as he is called, stopped here a few minutes. He is now entirely blind, and is quailed by a small boy. (T.S.R. 57. 2 P.M. 87. S.S. 73.) Sept. 14. Saturday. (T.S.R. 55. 2 P.M. 90. S.S. 75.) Sept. 15. Sabbath. We have had a S. school in our Hall today, after which Mr. Holden read a sermon. The subject was- redemption. A glorious theme - and one which angels love to dwell upon. May we all share in its great benefits. (T.S.R. 55. 2 P.M. 90. S.S. 80.) Sept. 16. Monday. This afternoon, Rev. Mr. Finney arrived from Wood bridge. He is Grand Lecturer for the Soy of Temperance in Cal. and will lecture here soon. He is a brother of Prof. Finney of Oberlin College, Ohio. He was formerly from Haverhill, Mass, and now resides at Oakland. He is also a Congregational preacher. (T.S.R. 55. 2 P.M. 88. S.S. 70.) Sept. 18. Tuesday. Father started for Sac. to attend the State Fair in company with Geo. and Susie. Mr. Finney has been here all day, and this eve he has gone to Woodbridge in company with the Dr. where he is to deliver a temperance lecture. I have written to Mother. Subjects of my letter. Fair in Stockton - Working hard - neglecting children - Father liking Cal. Lines - Nettie Moore. (T.S.R. 53. 2 P.M. 89. S.S. 72.)