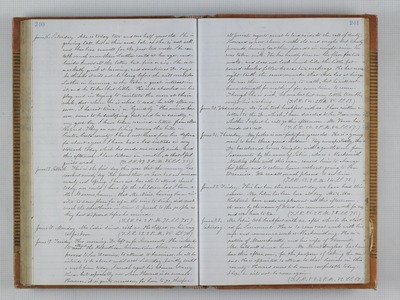 June 16. Saturday. Ada is today two and one half years old. She is growing tall, but is thin and pale, as she is not well, and has been unwell for the past two weeks. She can talk much more than Luther could at her age, and besides knows all the letters but five or six. She is remarkably quick at learning, and sometimes Dr. says he thinks it will not be long before she will overtake Luther in learning, as she takes a great interest in it, and he takes but little. He is so absorbed in his play and in trying to imitate the men at their work, that when he is asked to read, he will often answer, "I haven't time," or "by and by." His mind however, seems to be developing fast, and he is usually a very good boy. I have today received a letter from Mrs. Shepard. They are now living among the hills in Contra Costa county. I have not heard from her before for about a year. I have had a bad distress in my stomach today which has made me nearly sick, and this afternoon I have taken an emetic, so that I feel quite weak. (T.S.R. 49. 2 P.M. 86. S.S. 75.) June 17. Sabbath. This is the first day this year that the mercury has reached ninety deg. This proves that we have had an uncommonly cool spring. I have not been able to attend church today, nor could I have left the children had I been able. It seems, however, that Mr. Nims, having been invited to some place far up on the river to dine, did not reach the schoolhouse in time to preach to the people, as they had dispersed before he arrived. (T.S.R. 54. 2 P.M. 90. S.S. 75.) June 18. Monday. Mr. Eadie dined with us. He stopped on his way to Jackson. (T.S.R. 52. 2 P.M. 85. S.S. 71.) June 19. Tuesday. This morning, Dr. left us for Sacramento. He intends to attend the Republican Convention there, and then proceed to San Francisco, to attend to business. In all, he intends to be absent until next Saturday, possibly until a week from today. I much regret his absence at any time, but especially now when Howard is so unwell. However, it is quite necessary for him to go, therefore all private regrets must be laid aside at the call of duty. Howard is now eleven months old and weighs but twenty pounds, having lost three pounds in weight since he was taken sick. He has hardly been on the floor for two weeks, and does not look much like the little, fat round - checked fellow he was two weeks ago. He has now eight teeth, the same number that Ada had at his age. She was then commencing to walk, but he will not have strength for walking for sometime to come. Though he is sick, he makes but very little trouble, except his washing. (T.S.R. 54. 2 P.M. 85. S.S. 69.) June 20. Wednesday. Mr. Tam took breakfast with us. I have written a letter to the Dr., which I have directed to San Francisco, whither I expect he will go this afternoon. Mr. Vance has made us a call. (T.S.R. 54. 2 P.M. 84. S.S. 67.) June 21. Thursday. My father is now forty five years old. He is a young man to have three grand-children. Very unexpectedly, the Dr. has returned home tonight, with a gentlemen from Sacramento by the name of Sabin, who is a blacksmith. Meeting there with this man, caused him to change his plans, and to return home without going to San Francisco. We are all much pleased to see him. (T.S.R. 52. 2 P.M. 84. S.S. 73.) June 22. Friday. This has been the warmest day we have had this season. Mr. Sabin has been here all day. Mr. & Mrs. Hitchcock have made us a pleasant call this afternoon. A man by the name of Ward has commenced work for us, and was here to tea. (T.S.R. 56. 2 P.M. 95. S.S. 75.) June 23. Saturday. Mr. Sabin took breakfast with us, after which he started for Sacraments. He is to come next week with his wife and commence work at blacksmithing. He is a native of Massachusetts, and his wife of Vermont. Mr. Caldwell dined here. Mr. Norval Douglass has been here this afternoon, for the purpose of taking the census. He is appointed to attend to that business in this county. Howard seems to be more comfortable today. I hope he will not be worse again. (T.S.R. 58. 2 P.M. 82. S.S. 63.)