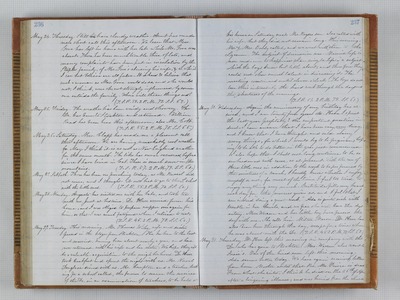 May 24. Thursday. Still have cloudy weather. Aunt has made me a short call this afternoon. We learn that Mrs. Gove has left her home with her babe while Mr. Gove was absent. There has been much trouble there of late, and many complaints have been put in circulation by the Staples family, of Mr. Gove's abusing his wife, etc. which I can but believe are all false. It is hard to believe that such a woman as Mrs. Gove would do so, and she would not, I think, were she not strongly influenced by some one outside the family. Where will these things end? (T.S.R. 50. 2 P.M. 73. S.S. 63.) May 25. Friday. The weather has been windy and showery. The Dr. has been to Stockton and returned. William Read has been here this afternoon, also Mr. Cobb. (T.S.R. 55. 2 P.M. 78. S.S. 65.) May 26. Saturday. Mrs. Clapp has made me a pleasant call this afternoon. We are having remarkably cool weather for May. I think it is as cool as New England weather for the same month. The like has never occurred before since I have lived in Cal. There is much snow in the mountains. (T.S.R. 57. 2 P.M. 79. S.S. 60.) May 27. Sabbath. There has been no preaching today, as Mr. Russel did not come, and I thought it not best to go to the S. school with the little ones. (T.S.R. 55. 2 P.M. 74. S.S. 60.) May 28. Monday. Augusta has visited me with her babe, and took tea with us. Just at bed time, Dr. Kerr arrived from his home, and I was obliged to prepare supper over again for him, so that I was much fatigued when I retired to rest. (T.S.R. 45. 2 P.M. 73. S.S. 60.) May 29. Tuesday. This morning, Mr. Thomas Wiley, wife and sister passed in the stage from Stockton. He has been to the East and married, having been absent nearly a year, and has now returned with his wife and her sister. We hope they will be a valuable acquisition to the neighborhood. Dr. Kerr took breakfast and spent the night with us. Mr. Norval Douglass dined with us. Mr. Compton and a teacher looking for a school called, the former to secure the services of the Dr. in an examination of teachers, to be held at his house on Saturday next. Mr. Rogers. sen. also called with his wife, but they did not remain long. This evening, Mr. & Mrs. Boody called, and we went with them to the Lyceum. The subject of discussion was - "Married life is more conducive to happiness than single life - "a subject which the boys knew but little about, and therefore they could not show much talent in discussing it. The meeting continued until eleven o'clock. The boys do not lose their interest by the hard work through the days and the shortness of the evenings. (T.S.R. 51. 2 P.M. 73. S.S. 61.) May 30. Wednesday. Again the anniversary of my birthday has arrived, and I am twenty four years old. Have I spent the last year profitably? An important question indeed. I can answer that I have been very, very busy, and I know that I have thought and said many wrong things, for which I would beg to be forgiven, hoping to be able to do better in the year just commenced. I also hope that I shall not long continue to be so over burdened with cares, as at present. With the care of three little ones in addition to the work to be performed by the mistress of a ranch, I hardly know whether I enjoy myself or not, for most of the time I feel too tried to enjoy anything very much. Gratitude fills my heart each day for the mercies given us, and I feel that I am indeed "doing a great work." Ada is quite sick with trouble in her bowels, and we fear she will have the dysentery. Mrs. Warren and her little boy have passed the day with me. She calls him Milton Mason. Dr. Kerr has also been here through the day, except for a time when he was absent with the Dr. (T.S.R. 45. 2 P.M. 73. S.S. 63.) May 31. Thursday. Dr. Kerr left this morning in company with the Dr. who has gone to Stockton. Mrs. Warren also went to Susie's. One of the hired men left this morning. Ada seems better today. We have again received letters from home. Mother writes that Rev. Mr. Pierce is dead. From what she writes, I think he died on the 26th of Apr. after a lingering illness, and was buried from the church.