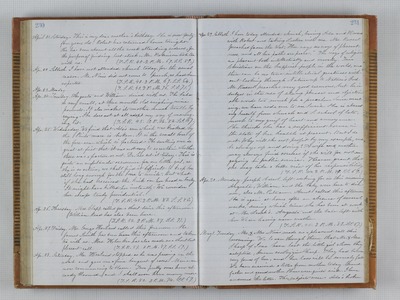 April 21. Saturday. This is my dear mother's birthday. She is now forty four years old. Robert has returned home tonight. He has been absent all the week attending roderos, for the purpose of finding lost stock. Mr. Robinson took tea with us. (T.S.R. 40. 2 P.M. 69. S.S. 59.) Apr. 22. Sabbath. I have not attended church today, for the usual reason. Mr. Nims did not come to preach, as had been expected. (T.S.R. 40. 2 P.M. 69. S.S. 64.) Apr. 23. Monday. (T.S.R. 40. 2 P.M. 76. S.S. 71.) Apr. 24. Tuesday. Augusta and William dined with us. The babe is very small, at three months old weighing nine pounds. It also makes its mother much trouble by crying. She does not at all adopt my way of managing it. (T.S.R. 45. 2 P.M. 82. S.S. 67.) Apr. 25. Wednesday. We find that Ada's arm which was kicked by the Pinto mare is broken. It is the small bone of the fore-arm which is fractured. The swelling was so great at first that it was not easy to ascertain whether there was a fracture or not. Dr. has set it today. This is quite an unfortunate occurrence for our little girl, as she is so active, we shall find it difficult to keep her still long enough for the bone to unite. But what if she had received the kick on her head or body. It might have killed her instantly. We consider her escape truly providential. (T.S.R. 45. 2 P.M. 83. S.S. 80.) Apr. 26. Thursday. Mrs. Clapp called for a short time this afternoon. William Read has also been here. (T.S.R. 50. 2 P.M. 87. S.S. 71.) Apr. 27. Friday. Mr. George Howland called this forenoon. Mr. James Smith has been here this afternoon and taken tea with us. Mrs. Klonker has also made us a short but pleasant call. (T.S.R. 51. 2 P.M. 87. S.S. 69.) Apr. 28. Saturday. Mr. Howland stopped as he was passing on the road and gave me a fine bouquet of roses. Mine are now commencing to bloom. Two pretty ones have at ready bloomed, and I shall soon have many more. (T.S.R. 50. 2 P.M. 74. S.S. 67.) Apr. 29. Sabbath. I have today attended church, leaving Ada and Howard with Robert and taking Luther with me. Mr. Russel preached from the text, "Her ways are ways of pleasantness, and all her paths are peace." The ways of religion are pleasant both intellectually and morally. True Christians are the happiest people in the world, and there can be no true intellectual greatness without looking through Nature up to Nature's God. Mr. Russel preaches very good sermons, but he indulges in the use of slang phrases and objection able words too much for a preacher. Since meeting, we have rode over to see Susie. She is absenting herself from church and S. school of late, much to my grief of heart and annoy ance. She thinks she has a sufficient excuse in the slate of her health at present. But I do not. Why will she not profit by my example, and be always up and doing? A wife and mother may always find excuses if she will for not engaging in public service. Heaven grant that she may take a better view of her responsibility. (T.S.R. 44. 2 P.M. 89. S.S. 69.) Apr. 30. Monday. Joseph Carrol left working for us this morning. Augusta, William and the baby were here to dinner, also Mr. Putnam. Aunt called this afternoon. She is again at home after an absence of several weeks, during which time she has been at work at Mr. Leach's. Augusta and the babe left with her. We are having warm weather. (T.S.R. 46. 2 P.M. 83. S.S. 67.) May 1. Tuesday. Mr. & Mrs. Nims made us a pleasant call this morning. We learn through them that Mr. & Mrs. Sharp of Ione have lost the little girl whom they adopted, known as Lizzie Sharp. They had become very fond of her, and her loss will be severely felt. We have received a letter from mother today. Grandfather and grandmother Shaw were quite sick. I have answered the letter. The subjects were Ada's broken