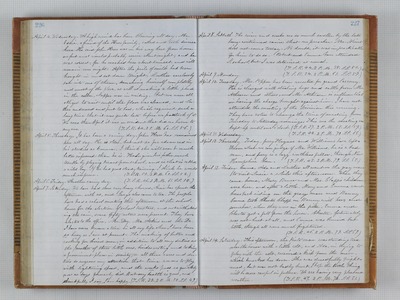 April 4. Wednesday. A high wind has been blowing all day. Mr. Eddie, a friend of the Kerr family, called and took dinner here. He said John Kerr was on his way here from home on foot and would probably arrive about night, and he was correct, for he reached here about sunset, and will remain over night. After the pails of milk had been brought in and set down tonight, Luther carelessly sat into one of them, drenching himself completely and most of the floor, as well as making a little pond in the cellar. Supper was in waiting, but we were all obliged to wait until the floor was cleaned, and Luther undressed and put to bed, which required such a long time that it was quite late before we partook of it, We were thankful it was an accident that did no harm to anyone. (T.S.R. 44. 2 P.M. 60. S.S. 56.) April 5. Thursday. It has been a rainy day. John Kerr has remained here all day. He is older, but not so far advanced in his studies as Emma. I think she will soon be much better informed than he is. He has given his father much trouble by playing truant from school, and is, what is called, a wild boy. If he had good steady training, I think he would much improve. (T.S.R. 50. 2 P.M. 60. S.S. 52.) April 6. Friday. Another rainy day. (T.S.R. 46. 2 P.M. 61. S.S. 52.) April 7. Saturday. We have had some very heavy showers. Susie has spent the afternoon with us, and George also came to tea. The people have had a school meeting this afternoon at the schoolhouse for the election of school trustees, and notwithstanding the rain, some fifty voters were present. They have elected to the office, Mr. Day, Mr. Atkins and the Dr. I have never known a time in all my life when I have been so busy as I am at present. The making of butter and cooking for hired men, in addition to all my duties as the mother of three little ones, besides writing and taking a prominent place in society, all these cares and duties so engross my attention that time seems to fly with lightning speed, and the weeks pass as quickly now as days formerly did. But my health is good, and fully I say, I am happy. (T.S.R. 33. 2 P.M. 50. S.S. 49.) April 8. Sabbath. The rivers and creeks are so much swollen by the late long-continued rains, that our preacher- Mr. Nims did not come today. No doubt, it was impracticable for him to do so. Robert and Emma have attended S. school, but I was detained as usual. (T.S.R. 44. 2 P.M. 58. S.S. 50.) April 9. Monday. (T.S.R. 34. 2 P.M. 61. S.S. 57.) April 10. Tuesday. Mr. Poppee has been arrested for grand larceny. He is charged with stealing hogs and cattle from Mr. Athearn and others, and Mr. Athearn is influential in having the charge brought against him. I have not attended the meeting of the Division this evening. They have voted to change the time of meeting from Tuesday to Saturday evenings. This eve the meeting was kept up until one o'clock. (T.S.R. 37. 2 P.M. 68. S.S. 59.) April 11. Wednesday. (T.S.R. 42. 2 P.M. 70. S.S. 66.) April 12. Thursday. Today, Jerry Haynes and Williams have left. From what we can judge of Mr. Williams, he is a bad man, and Jerry is a lazy, worthless fellow, though New Hampshire born. (T.S.R. 43. 2 P.M. 79. S.S. 68.) April 13. Friday. Emma, Ada and Luther all went on the gray mare to visit Susie a while this afternoon. When they came home, Mary Bruce and Mrs. Clapp's children were here, and after a little, Mary and Emma went horseback riding on the grays mare and Benny. Emma took Chester Clapp on Benny with her, and somehow, when they were in the field, Emma and Chester got a fall from the horse. Chester, fortunately, was not hurt at all, and Emma was bruised but little, though all were much frightened. (T.S.R. 46. 2 P.M. 79. S.S. 69.) April 14. Saturday. This afternoon, the Pinto mare was standing tied near the house with a little colt, and Ada, in trying to play with the colt, received a kick from the mare, which knocked her down. She was dreadfully brightened, but was not badly hurt. I hope the little thing will be more careful in future. We are having very pleasant weather. (T.S.R. 47. 2 P.M. 72. S.S. 61.)