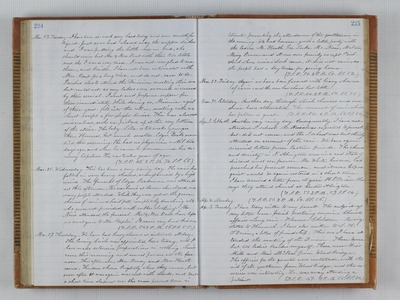 Mar. 27. Tuesday. I have been at work very hard today and am much fatigued. Just as we had cleared away the supper dishes and I was putting the little ones in bed, who should arrive but Mr. & Mrs. Burt with their two little ones. As I was so very tried, I was not over glad to see them, and besides, I have not been intimate with Mrs. Burt for a long time, and do not care to be. I wished also to attend the Division meeting this eve but could not, as my labors were so much increased by their arrival. I went and prepared supper for them immediately. While doing so, Minnie - a girl of three years - fell into the cellar, meeting with no hurt except a few slight bruises. This was almost miraculous, as she was picked up at the very bottom of the stairs. The baby - Lilla - is two weeks younger than Howard, but much smaller. Edgar Brakeman died this morning. He had no physician until two days ago, and when he came, he pronounced his recovery hopeless. He was twelve years of age. (T.S.R. 46. 2 P.M. 74. S.S. 66.) Mar. 28. Wednesday. This has been a very rainy day. The rain has fallen in very heavy showers, accompanied by a high wind. The funeral of Edgar Brakeman was attended this afternoon, He was buried at the new church yard, and many people attended. While they were yet at the grave, showers of rain and hail fell, completely drenching all who were not provided with rubber clothing. Mr. Nims attended the funeral. Mr. & Mrs. Burt have left us and gone to Mr. Staples'. It rains very hard this eve. (T.S.R. 54. 2 P.M. 58. S.S. 55.) Mar. 29. Thursday. We have had heavy showers at intervals all day. The Sewing Circle was appointed here today, and I have made extensive preparations in cooking. Susie came this morning and sewed for me all the forenoon. This afternoon, Mrs. Boody and Mrs. Heath came. The sun shone brightly when they came, but soon after it was again overcast with clouds, and but a short time elapsed ere the rain poured down in torrents, preventing the attendance of the gentlemen in the evening. We had however, quite a little party with the ladies, Mr. Heath, Geo. Locke, Mr. Nims, Milton, Mary Bruce and all our own family except Paul. And when nine o'clock came, it did not rain, so the people had a dry time for going home. (T.S.R. 50. 2 P.M. 60. S.S. 52.) Mar. 30. Friday. Again we have been favored with heavy showers of rain, and the sun has shone but little. (T.S.R. 44. 2 P.M. 64. S.S. 56.) Mar. 31. Saturday. Another day, through which showers and sunshine have alternated. The amount of rain which has fallen is great. (T.S.R. 50. 2 P.M. 63. S.S. 56.) Apr. 1. Sabbath. Another very rainy day. Consequently, I have not attended S. school. Mr. Russel was expected to preach but did not come, and the S. school was but thinly attended on account of the rain. We have again received letters from Eastern friends. The church and society in N. Abington were in a sad state of discord and confusion. Mr. White, however, had preached his farewell sermon, and it was hoped quiet would be again restored in a short time. I have received a letter from Lydia H. O'Brien. She says they attend church at Center Abington. (T.S.R. 51. 2 P.M. 57. S.S. 54.) Apr. 2. Monday. (T.S.R. 51. 2 P.M. 64. S.S. 56.) Apr. 3. Tuesday. I have today written to my parents. The subjects of my letter were - Josiah practicing music, Church affairs Long rain - Flowers - Children - Sewing - Letter to Hannah. I have also written to S. H. O'Brien, a letter of friendship. This eve. I have attended the meeting of the Division. There were but two ladies besides myself. There were Miss Mills and Miss McNeal from Woodbridge. The officers for the quarter were installed, with the aid of the gentlemen from Woodbridge, and the exercises were interesting. Dr. was away attending a patient. (T.S.R. 47. 2 P.M. 65. S.S. 54.)