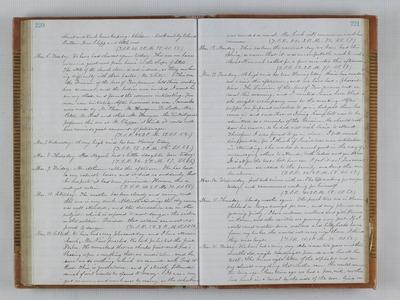 Aunt and Uncle house keeping - Children - Book sent by Roland. Butter Mrs. Clapp and little ones. (T.S.R. 48. 2 P.M. 58. S.S. 51.) Mar. 6. Tuesday. We have had showers again today. This eve we have received "good news from home" in the shape of letters. The state of the church there is sad indeed, as they are having difficulty with their pastor - Mr. White. This eve the Division of the Sons of Temperance held their meeting here as usual, and the ladies were invited. I went in among others, and found the exercises interesting, Two men were initiated. After business was over, remarks were made by Mr. Place, Mr. Kragan, Dr. Locke, Mr. Peters, Mr. Neal and others. Mr. Kenyon - the Ventriloquist performs this eve at Mr. Clapp’s. I think it could not have received a great amount of patronage. (T.S.R. 44. 2 P.M. 58. S.S. 52.) Mar. 7. Wednesday. A very high wind has been blowing today. (T.S.R. 37. 2 P.M. 56. S.S. 53.) Mar. 8. Thursday. Mrs. Megerle had a little daughter born today. (T.S.R. 34. 2 P.M. 67. S.S. 61.) Mar. 9. Friday. Mr. Athearn called this afternoon. He has lost a very valuable horse, and it died so suddenly, that he suspects it had been poisoned. However this is not yet certain. (T.S.R. 40. 2 P.M. 70. S.S. 65.) Mar. 10. Saturday. The weather has been cloudy and rainy, and this eve is very dark. Notwithstanding, the Lyceum was well attended, and the discussion was on the subject - which is exposed to most danger - the sailor or the soldier. Decided that soldiers are most exposed to danger. (T.S.R. 52. 2 P.M. 66. S.S. 58.) Mar. 11. Sabbath. We have had a very pleasant day, and I have attended church. Mr. Nims preached. He took for his text the first Psalm. He remarked that we should first seek God's blessing upon everything that we undertake, and be sure we do nothing which we cannot ask God to bless. This is good advice, and if strictly followed, much of evil would be spared to many. It was a very good sermon, and was heard by many, as the schoolhouse was crowded as usual. Mr. Cook will commence work here tomorrow. (T.S.R. 50. 2 P.M. 70. S.S. 67.) Mar. 12. Monday. This has been the warmest day we have had this spring, so warm that it was uncomfortable work to wash Aunt Hannah called for a few minutes this afternoon. (T.S.R. 52. 2 P.M. 77. S.S. 69.) Mar. 13. Tuesday. A high wind has been blowing today. Susie has made me a visit this afternoon, and we have had a pleasant time. The Division of the Sons of Temperance met as usual this evening, and I invited Susie here that she might accompany me to the meeting. After supper we prepared ourselves to go in, but just then Geo. came in and said that as Irving Campbell was to be admitted as a member of the Division, he should withdraw his name, so he did not wish Susie to attend. Therefore I was forced to go in alone. I felt much disappointed, for I think if Susie was once interested in attending, she would do much good in the way of encouraging others to attend, both ladies and gentlemen It is all for the best, but how can I feel it so? Two more workmen are added to the family, making the number eleven. (T.S.R. 50. 2 P.M. 65. S.S. 59.) Mar. 14. Wednesday. Jacob took dinner with us. He left working for us yesterday, and commenced working for himself. (T.S.R. 40. 2 P.M. 68. S.S. 63.) Mar. 15. Thursday. Cloudy weather again. The peach trees are in bloom rhubarb is large enough for use, and my flowers are growing finely. I have verbenas, mallows and gilliflowers in bloom, and other varieties are growing very fast. If I could send mother some mallows and holly hocks leaves from my bushes, she would not recognize them, I think they are so large. (T.S.R. 55. 2 P.M. 70. S.S. 62.) Mar. 16. Friday. We have had a rainy day. Ada is now two years and three months old, weighs twenty eight pounds and has all her teeth. She knows eight letters of the alphabet and can say almost every thing that Luther can. She could count ten long ago. Some time ago we had a poor, sick, motherless lamb in a barrel by the side of the door, lying on