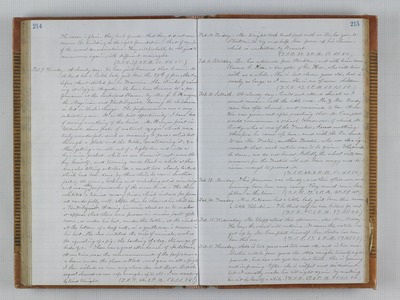 The season is plain they lack funds. And they did not commence the building on the right foundation, that of union of the several denominations. They will probably be obliged to commence again, with different managers. (T.S.R. 37. 2 P.M. 60. S.S. 55.) Feb. 9. Thursday. A cloudy day. We have just learned that Cousin & A. Reed has a little baby girl born the 29th of Jan, the day before Aunt started for San Francisco. She thinks of naming it Lizzie Augusta. We have been this eve to a performance at the Lockeford House, by Mr. J. G. Kenyon the Magician and Ventriloquist, leaving the children in bed in Uncle's charge. The performance was a very interesting one. It is the first opportunity I have had of seeing anything of the kind. Mr. Kenyon first introduced some feats of natural magic which were truly wonderful, such as seeming to pass a solid ball through a plate and the table, swallowing it, etc. Also, getting a candle out of a light box and into a boy's inner pocket, while us one knew it, not even the boy himself, and turning cards black or white at pleasure, also telling articles in a small box closely locked, which had been done by others while he was in another part of the room, locking and unlocking solid iron rings and many other performances of the same kind. He then exhibited a trained canary bird, which indeed performed wonderfully well. After this, he showed his skill as a Ventriloquist, throwing his voice about so as to make it appear that there were persons in various parts of the room, as under his hat, under the table, at the window at the bottom of a deep well, in a gentleman's bosom, in his boot. He also imitated the cries of animals, such as the squealing of a pig, the barking of a dog, the songs of birds, etc. There was a good attendance of spectators. At one time, near the commencement of the performance a beam under the floor settled, and gave us all a fright I then wished we were any where else but there. But the request showed we were safe enough, after all. I am exceedingly tired tonight. (T.S.R. 42. 2 P.M. 63. S.S. 55.) Feb. 10. Friday. Mr. Wright took breakfast with us. Dr. has gone to Stockton to try and help Geo. prove up his claim, which is contested by Brunet. (T.S.R. 39. 2 P.M. 61. S.S. 56.) Feb. 11. Saturday. Dr. has returned from Stockton, and with him came Emma C. Kerr, a daughter of Dr. Kerr, who will live with us a while. She is not but eleven years old, but is nearly as large as I am. She is one of seven children. (T.S.R. 43. 2 P.M. 63. S.S. 55.) Feb. 12. Sabbath. A cloudy day. Could not attend church as I must remain with the little ones. Mr. & Mrs. Boody came here after church, and remained to tea. A notice was given out after preaching that Mr. Campbell would commence a school tomorrow, of which Mr. Boody, who is one of the Trustees, knew nothing. Therefore he came up here, and with the Dr. went to see Mr. Foster, another Trustee, who was also ignorant that such notice was to be given. What will be done, we do not know. Probably the school will commence, for the Trustees will not have energy and decision enough to present it. (T.S.R. 44. 2 P.M. 61. S.S. 58.) Feb. 13. Monday. This forenoon was cloudy, and this afternoon and evening have been very rainy. Very much rain has fallen in the time. (T.S.R. 39. 2 P.M. 48. S.S. 48.) Feb. 14. Tuesday. Mrs. Putnam had a little baby girl born this morn. a little Valentine. The blind calf has been killed for veal. (T.S.R. 45. 2 P.M. 57. S.S. 48.) Feb. 15. Wednesday. Mr. Clapp called this afternoon, also Mr. Boody. He says the school will continue. It seems the notice was got up by Mr. Campbell himself. Geo. Locke has been here this eve. (T.S.R. 39. 2 P.M. 59. S.S. 57.) Feb. 16. Thursday. Ada is two years and two mos. old, and in two mos. Luther will be four years old. Ada weighs twenty eight pounds, but has not yet her last tooth. She is growing and improving. Often she is wilful and disobedient, but I usually make her all right again, by making her sit by herself a while. (T.S.R. 37. 2 P.M. 55. S.S. 54.)