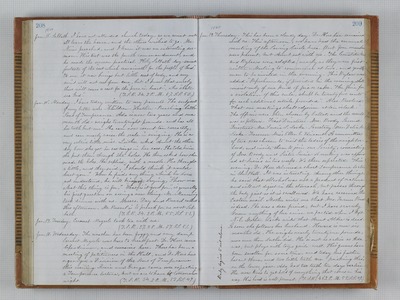 1860. Jan. 15. Sabbath. I have not attended church today, as we must not all leave the house, and the others wished to go. Mr. Nims preached, and I learn it was an interesting sermon. His text was the fourth commandment, and he made the sermon practical. Holy Sabbath day - sweet foretaste of the "rest which remaineth for the people of God." To me it now brings but little rest of body, and my mind will not rest from care, but I know that surely there will come a rest for the "pure in heart", who "shall see God." (T.S.R. 34. 2 P.M. 57. S.S. 50.) Jan. 16. Monday. I have today written to my parents. The subjects of my letter were - Children - Weather - Preaching - Cattle Sons of Temperance. Ada is now two years and one month old - weighs twenty eight pounds - and has all her teeth but one. She can now count ten correctly, and can nearly raise the scale in singing. She is a very active little miss. Luther asked Aunt the other day how she got her earrings in her ears. She told him she put them through the holes. He then asked how she made the holes. She replied, with a needle. He thought a little, and then said, "I should think it would hurt you." When he finds anything which he does not understand, he will bring it, saying, "Show me what this thing is for." What is it good for", is generally his first question on seeing a new thing. Mr. Manning took dinner with us. Messrs. Day and Russel called this afternoon. Mr. Russel is to preach for us next Sabbath. (T.S.R. 34. 2 P.M. 55. S.S. 51.) Jan. 17. Tuesday. Earnest Megerle took tea with us. (T.S.R. 37. 2 P.M. 57. S.S. 51.) Jan. 18. Wednesday. The weather has been foggy and very damp. Earnest Megerle was here to breakfast. Dr. Kerr came before dinner, and remains here. There has been a meeting of petitioners in the Hall, and Dr. Kerr has organized a Division of the Sons of Temperance this evening. Susie and George came over expecting a Temperance lecture, but we are to have it tomorrow night. (T.S.R. 34. 2 P.M. 53. S.S. 49.) 1860. Jan. 19. Thursday. This has been a cloudy day. Dr. Kerr has remained with us. This afternoon, we have had the annual meeting of the Sewing Circle here. But four members were present, but Aunt sat with us. The Constitution and Bylaws were adopted, nearly as they were first written - Meeting to commence at two, and gentlemen to be invited in the evening. This Bylaw was added. "Refreshments, if provided in the evening, shall consist only of one kind of pie or cake. The five for a violation of this rule, shall be twenty five cents for each additional article provided." Also Resolved. "That our meetings shall adjourn at ten o'clock." The officers were then chosen by ballot, and the result was as follows. First Directress. Mrs. Boody. Second Directress. Mrs. Susie L. Locke. Secretary. Mrs. Delia Mr. Locke. Treasurer. Miss Ellen E. Vincent. A committee of two was chosen to visit the ladies of the neighborhood, and invite them to join our Society, consisting of Mrs. Boody and Sister Susie. A meeting was appointed at Susie's in two weeks. We then separated. This evening, Dr. Kerr delivered a short Temperance lecture in the Hall. It was interesting. Among other things, he said that Alcohol was not a product of nature and will not digest in the stomach, but passes through the body just as it is swallowed. We have received the Eastern mail. Mother writes me that Mrs. Turner Reed is dead. She was a dear friend, but I have scarcely known anything of her since we parted when I left N. E. Mother Locke writes that Aunt Albee is dead. So soon she follows her husband. Howard is now six months old. He weighs nearly twenty one pounds, more even than Luther did. He is not as active as Ada was, but plays with toys quite well. His gums have been swollen for some time, and today his father has cut them, and two little teeth are pricking this, on the lower jaw. Ada had two teeth ten days earlier. He now tries to get hold of everything that comes in his way. His head is well - formed. (T.S.R. 46. 2 P.M. 55. S.S. 49.) Baby begins to sit alone.