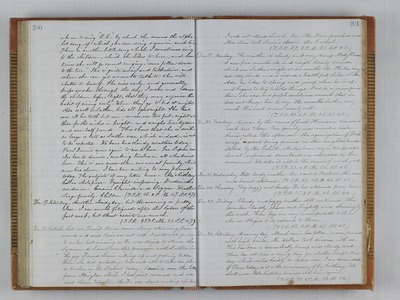 asks me to sing "B. C," by which she means the alphabet song, of which she can sing some in each line. There is another little song which I sometimes sing to the children, which she likes to hear, and sometimes she will go round singing, "come follow down to the tree." She is quite noise and talkative, and when she can get no one to talk to, she will chatter to herself. She rises early, and generally keeps awake through the day, I wake and dress the children before light, that they may acquire the habit of rising early. When they go to bed at night, Ada as well as Luther, bids all goodnight. She has now all her teeth but one - measures two feet, eight and three - fouths inches in height - and weighs twenty seven and one-half pounds. This shows that she is neither so large or tall as Luther was, which indeed, is not to be expected. We have had cloudy weather today. Paul Dennis came again to work here. Geo. Lepee was also here to dinner, making twelve in all who dined here. This is one more than our usual family, which numbers eleven. I have been writing to my parents today. The subjects of my letter were - "Ada's birthday Calico whole price - Eyesight improving. Broderick's residence. Cousins Clarinda and Lizzie. Weather. Large family. Children. (T.S.R. 43. 2 P.M. 47. S.S. 47.) Dec. 17. Saturday. Another cloudy day, but the evening is pretty clear. I am much fatigued after the labors of the past week, but Aunt assists me much. (T.S.R. 45. 2 P.M. 51. S.S. 47.) Dec. 18. Sabbath. Last eve. Daniel Bruce came along returning from an errand and said Susie was not well. I could not go over to see her last evening, as Dr. was obliged to attend the Lyceum, so I went over this forenoon with Luther, in the gig. Found Susie sitting up and feeling better than she did yesterday, but not able to take her place as teacher in the S. school today. I carried over the letter from Abington which I had just received and we read them together. As Dr. was absent visiting a patient I could not attend church. Rev. Mr. Nims preached and Mrs. Nims took Susie's class in the S. school. (T.S.R. 37. 2 P.M. 51. S.S. 45.) Dec. 19. Monday. The weather is cloudy and very damp. Baby Howard is now five months old and weighs twenty pounds, which was Luther's weight at six months old. He has very red, rosy checks and is indeed a healthful child. Like Ada, he likes to spring and jump when he is up, and begins to try to hold things. But he is more quiet than she was, and people sometimes remark that he does not know how to cry. He resembles Luther very much. His head is now nearly well. (T.S.R. 40. 2 P.M. 46. S.S. 45.) Dec. 20. Tuesday. A man by the name of Jacob Hermann commence work here today. Our family now numbers twelve. Susie called this afternoon. An organization of "Dashaways" is about being formed in this neighborhood started by Mr. Cahill, who has been very in temperate. Leveral confirmed drunkards are interested in the movement. We hope it will be the means of much good. (T.S.R. 39. 2 P.M. 50. S.S. 45.) Dec. 21. Wednesday. Still cloudy weather. Dr. went to Stockton this mon. and has not returned. (T.S.R. 37. 2 P.M. 44. S.S. 43.) Dec. 22. Thursday. Very foggy and cloudy. Dr. has returned from town. (T.S.R. 36. 2 P.M. 43. S.S. 42.) Dec. 23. Friday. Cloudy and foggy weather still continues. The sun has hardly shone out brightly and cheeringly this week. These fogs are very uncomfortable to those who are obliged to be exposed to them. (T.S.R. 37. 2 P.M. 47. S.S. 46.) Dec. 24. Saturday. A rainy day. Much rain has fallen, accompanied with high wind. Mr. Wallace took dinner with us. This has been a remarkably damp and cloudy week. There has not been a drying day for clothes except Tuesday, which could hardly be called one. I am reminded of Elmer today, as it is the anniversary of his birthday. We shall never take birthday dinners with him again. (T.S.R. 50. 2 P.M. 54. S.S. 52.)