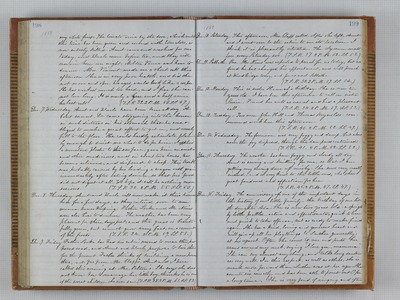 1859 very white frost. The tomato vine by the door, which until this time has been green and covered with tomatoes, is now entirely killed. Aunt came and washed for me today, and Uncle came before tea, and they will remain here over night. Milton Vance was here to dinner. Mrs. Vincent made me a short call this afternoon. She is in very poor health, and did she not move and open her eyes, would look like a corpse. She has worked much too hard, and I fear she cannot live long. It is nearly a year and a half since her last call. (T.S.R. 32. 2 P.M. 50. S.S. 47.) Dec. 7. Wednesday. Aunt and Uncle have been here all day. About sunset, Dr. came staggering into the house in such distress in his stomach that he was obliged to make a great effort to get in, and nearly fell to the floor. He could hardly articulate plainly enough to direct me what to do for him. I applied a mustard plaster to the surface, gave him an emetic and other medicines, and in about two hours, he became relieved, and disposed to sleep. This trouble was probably caused by his loading a wagon with grain immediately after eating dinner, so that his food did not digest at all. We hope it will be nothing more serious. (T.S.R. 32. 2 P.M. 55. S.S. 50.) Dec. 8. Thursday. Aunt and Uncle will now make it their home here for a few days, as they intend soon to commence house keeping. Father Locke and Mr. Nims were also here to dinner. The weather has been very pleasant for three days past, and the grass is beautifully green, but cannot grow very fast, on account of the frosts. (T.S.R. 34. 2 P.M. 59. S.S. 53.) Dec. 9. Friday. Father Locke has had his cabin moved to near the proposed road, and Aunt and Uncle propose to live there for the present. Father thinks of building a new house there, not far from Mr. Clapp’s. Aunt and I have called this evening at Mr. Pelton's. She says she does not know how to manage her little boy, thinks he is one of the worst children she ever saw. (T.S.R. 38. 2 P.M. 61. S.S. 52.) 1859. Dec. 10. Saturday. This afternoon, Mrs. Clapp called. After she left, Aunt and I went over to the cabin to see its location, I think it is pleasantly situated. The Lyceum mats here every Saturday eve. (T.S.R. 37. 2 P.M. 62. S.S. 53.) Dec. 11. Sabbath. Rev. Mr. Nims was expected to preach for us today, but we find he has changed his appointment, and will preach at Wood bridge today, and for us next Sabbath. (T.S.R. 32. 2 P.M. 59. S.S. 54.) Dec. 12. Monday. This is sister Hannah's birthday. She is now ten years old. I have been this afternoon to call on sister Susie. Found her well as usual and had a pleasant call. (T.S.R. 34. 2 P.M. 59. S.S. 53.) Dec. 13. Tuesday. Two men - John Hill and Thomas Reynolds commenced work here this afternoon. (T.S.R. 40. 2 P.M. 52. S.S. 49.) Dec. 14. Wednesday. The forenoon was very foggy and damp, but about noon the fog dispersed, though the dampness continued. (T.S.R. 41. 2 P.M. 52. S.S. 52.) Dec. 15. Thursday. The weather has been foggy and cloudy all day. Aunt is sewing and knitting for one, so that I am getting my sewing done up nicely. She sews very neatly indeed, and is very kind to the little ones, who show great fondness and affection for her. (T.S.R. 45. 2 P.M. 47. S.S. 47.) Dec. 16. Friday. The anniversary of one of the important days in the history of our little family - the birthday of our little daughter Ada. She is now two years old - a sprightly little prattler, active and affectionate, quick to learn and quick to take offence, but as ready to make friends again. She has a kind, loving and generous heart, and will give up all her playthings to Luther generally, at his request. Often she comes to me and puts her arms around my neck, saying "I love you, mamma." She can say almost anything, and talks long sentences very well. In this respect, as well as others, she is much more forward than Luther was at her age. She counts six correctly, and has been able to point out O for a long time. She is very fond of singing and often