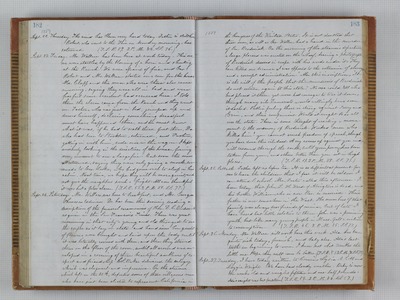 1859. Sept. 22. Thursday. The wind has blown very hard today. Father is still here. Robert, who went to the Fain on Monday morning, has returned. (T.S.R. 59. 2 P.M. 82. S.S. 76.) Sept. 23. Friday. Mr. Wallace has been here at work today. This eve. we were startled by the blowing of a horn and shouting at the Ranch. We were afraid of fire, and Geo. Robert and Mr. Wallace started on a run for the horse Mr. Clapp and the men who were there also came running, saying they were all in bed and were fearful some accident had occurred here. I told them the alarm came from the Ranch and they went on. Father who was just in bed, jumped up and dressed himself, declaring something dreadful must have happened there, and he must know what it was, if he had to walk there. Just then, Dr. who had been to Stockton, returned, and Father, getting in with him, rode over in the wagon. I kept anxiously looking in the direction of the house, fearing every moment to see a large fire. But soon the men all returned, saying they were only giving a mock serenade to Geo. Locke, who had gone over to sleep in his cabin. Next time, we hope they will be more quiet, and not give the neighbors such a fright. All were thankful it was but a false alarm. (T.S.R. 55. 2 P.M. 88. S.S. 77.) Sept. 24. Saturday. Mr. Wallace was here to breakfast, and Mr. George Thomason to dinner. Dr. has been this evening reading a description of the funeral ceremonies of Hon. D. C. Broderick as given in the San Francisco Times. There was great mourning in that city - young and old thronged to see the corpse as it lay in state and hand some bouquets of flowers were brought and laid upon the body until it was literally covered with them, and then they strewed them on the floor of the room, until all around was enveloped in a covering of those beautiful emblems of respect and friendship. Col. Baker delivered the eulogy which was eloquent and impressive. On the steamer which left on the 20th, departed some of those villanous men who have just been elected to represent California in 1859. the Congress of the United States. It is not doubted that these men, as well as Gov. Waller, had a hand in the murder of Sen. Broderick. On the morning of the steamer's departure, a large placard was erected on the wharf, bearing a photograph of Broderick dressed in crape with his words under it. "They have killed me because I was opposed to the extension of slavery and a corrupt administration." Also this inscription. "It is the will of the people that the murderers of Broderick do not return again to this state." No one could tell who had placed it there, yet none had courage to tear it down, though many rile Democrats would willingly have seen it dashed. Public feeling there is strong against Terry and Gwin, and their companions. Would it might be so all over the state. There is some thought of erecting a monument to the memory of Broderick. Wicked men who killed him! you cannot crush freedom of speech, though you have done this vile deed. A cry comes up against you and will resound through the earth, until your power has been taken from you, and others better than you sit in high places. (T.S.R. 51. 2 P.M. 83. S.S. 71.) Sept. 25. Sabbath. Father left us before tea. It is so difficult at present for me to leave the children that I fear it will be seldom I can attend S. school. Mr. Foster called this afternoon. I learn today, that John L. H. Ward of Abington is dead, and his brother William, who is now Rev. is married. Their father is now somewhere in the West. The members of that family were always dear friends of mine, but of late I have heard but little relative to them. John was a promising youth, but like many young people in Mass. fell a victim to consumption. (T.S.R. 46. 2 P.M. 85. S.S. 77.) Sept. 26. Monday. Mr. Wallace will work here this week. Ada has been quite sick today, feverish, and baby also. Ada's last teeth are beginning to come. I know not what troubles the little one. Hope they will soon be better. (T.S.R. 51. 2 P.M. 90. S.S. 73.) Sept. 27. Tuesday. I have today written to Cousins Lydia A. Cobb and Lizzie Wright. We have had cloudy weather. Baby is now ten weeks old and weighs fifteen and one half pounds. Ada's weighs was but fourteen. (T.S.R. 53. 2 P.M. 82. S.S. 67.)