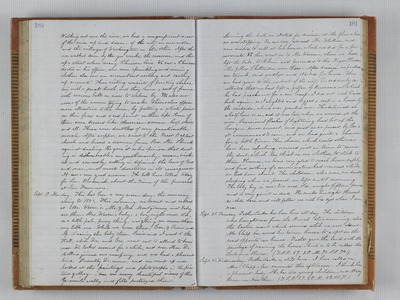 Walking out over the river, we had a magnificent view of the river up and down, of the city on one side and the village of Washington on the other. After this we walked down by the gas works, the reservoir, and then up a street where many Chinese live. We saw a Chinese doctor in his office, saw men sprinkling and ironing clothes, also saw an accountant writing and casting up accounts. Their writing consists of painting characters with a small brush, and they have a sort of frame with curious balls on wires to reckon by. We also saw some of the women trying to make themselves appear more attractive to the men, by putting a white paint on their faces and a red paint on their lips, Some of them were dressed like American women, hoop skirts and all. These were doubtless of very questionable morals. After supper, we went to the First Baptist church and heard a sermon from Rev. Mr. Shuck against dueling. He gave it as his opinion that dueling is dishonorable, ungentlemanly, mean, wicked and cowardly, setting in defiance the laws of God and man, and most disastrous in its consequences. It was a very good sermon. The bells have tolled today for Len, Broderick, about the time of the funeral at San Francisco. Sept. 19. Monday. This has been a very warm day, the mercury rising to 100º. This morning, we went and called at Mr. Warren's. Mr. & Mrs. Montgomery and baby are there, Mrs. Warren's baby, a boy eight mos. old, is a little pale, puny thing, weighing no more than my little one. While we were there, Geo. & Susie rode up. Leaving the baby there, Susie and I went to the Hall, while Dr. and Geo. went out to attend to business. We looked around for a while, and soon Mrs. Dr. Collins joined our comp any, and we had a pleasant time. Presently Dr. came, and we went up and looked at the paintings and photographs in the picture gallery. There are many beautiful views of the Yo-semile wallry and falls portrayed there. Leaving the hall, we started for dinner at the place where we were stopping. On our way, we met Mr. Whittier, and were invited to call at his house, which we did for a few moments. We then went on to Mr. Warren's, where we had left the babe, took him and proceeded to the Noyes House, Mr. & Mrs. Chittendon were there. After dinner, we packed our trunk, said goodbye and started for home. When we had gone to the suburbs of the city. Dr. suddenly recollected that we had left a gallon of kerosene oil which he had purchased for a new lamp. I did not wish to ride back again, so I alighted and begged a seat in a house by the road side, which was granted me. This detained us a half hour or so, and it was late when we arrived at the river. Occasional flashes of lightning had lit up the horizon since sunset, and just as we passed by Geo.'s it commenced to rain, and we had quite a shower for a little time. This shower, which would otherwise have been refreshing, occurred just in time to cause the dust, which lay thick on our clothes, to stick to them. However, we were very glad to reach home safely, and find nothing of a serious nature had occurred while we had been absent. The children, who were, no doubt, sleeping when we passed, we left until morning. The baby boy is now two mos. old, weighs fifteen pounds and is very quiet indeed. He sucks his right thumb as Ada does, and will follow me with his eyes when I am near. Sept. 20. Tuesday. Father Locke has been here all day. The children were brought over from the Ranch this morning, also the Eastern mail which arrived while we were absent. Mr. Clapp has moved his tavern house to a spot on the road opposite our house. Father gave the land with the privilege of naming the house which is to be called the Locke ford House. (T.S.R. 59. 2 P.M. 90. S.S. 74.) Sept. 21. Wednesday. Father Locke is still here. I have called on Mrs. Clapp a few minutes this afternoon. I think her a pleasant lady. She has two young children and Mary Bruce now lives there. (T.S.R. 57. 2 P.M. 83. S.S. 71.)