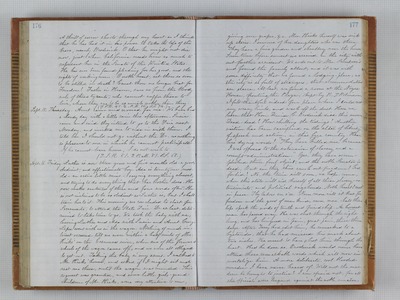 A thrill of sorrow shoots through my heart as I think that he has had it in his power to take the life of the brave, manly Broderick. O that he might not die now, just when California needs him so much to represent her in the Senate of the United States. He has ever been found pleading for her good, and the rights of working men. O noble heart, art thou so soon to be stilled in death? Canst thou no longer beat for Freedom? Father in Heaven, save us from the bloody rule of these tyrants, who cannot suffer those to live, whom they see to be so much nobler than they. (T.S.R. 48. 2 P.M. 86. S.S. 74.) Sept. 15. Thursday. Aunt came and ironed for me. We have had a cloudy day with a little rain this afternoon. Susie came and said they intend to go to the Fair next Monday, and invited me to ride in with them. I told her I should not go without the Dr. as nothing is pleasure to me in which he cannot participate. If he cannot leave home, I do not wish to. (T.S.R. 51. 2 P.M. 81. S.S. 68.) Sept. 16. Friday. Luther is now three years and five months old - a good, obedient, and affectionate boy. Ada is twenty one mos. old - an active little miss - saying everything almost, and trying to do everything that her brother does. She now makes sentences of three and four words often. She is not inclined to be so obedient as Luther is, but I shall train her to it. This morning we concluded to start for Sacraments, to attend the State Fair. Dr. at last, determined to take time to go. We took the baby with us, leaving Luther and Ada with Susie and Aunt. George Lepee went with us in the wagon. Nothing of much interest occurred till we were within a half mile of Mr. Hick's on the Cosumnes river, when one of the forward wheels of the wagon came off, and we were all obliged to get out. Taking the baby in my arms, I walked to Mr. Hicks' house, and asked if I might sit and rest me there, until the wagon was mended. This request was granted, and some little girls - grandchildren of Mr. Hicks, were very attentive to me, giving me grapes, etc. Mrs. Hicks herself was sick up stairs. I saw one of her daughters who was there. They have a fire garden and shrubbery near the house. Sometime before sunset we arrived in the city, without further accident. We rode out to Mr. Sweetser's and found the family absent, and it was with some difficulty that we found a lodging-place, as the city is so full of strangers, that accommodation are scarce. At last, we found a room at the Noyes House, fronting the Plaza, kept by R. T. Robinson. I felt thankful indeed fore place where I could rest my weary limbs, and wash off the dust. Here we learn that Hon. David C. Broderick died this morn. Dead - dead! How chilling the tidings! Another victim has been sacrificed on the alter of liberty of speech and action, in this free country. Hear his dying words! "They have killed me because I was opposed to the extension of slavery and a corrupt administration." Yes, they have accomplished their foul object, and the noble Senator is dead. But can they thus crush out freedom? God forbid! No, the time will soon, we hope, come, when this state will rid herself of all these slavery - extensionists, and political vagabonds. Noble heart! rest in peace. They labors are o'er. Never more will it beat for freedom and the good of man kind, never more shall those lips speak the words of truth and friendship. An honest man has passed away. He was shot through the right lung, and has lingered in pain, great pain, these three days. After Terry had shot him, he remarked to a bystander, that he had missed his mark about two inches. He meant to have shot him through the heart. Had he done so, Broderick would never have uttered those remarkable words which will now immortalize him. A more deliberate, cool-blooded murder I have never heard of. Will not the murderer be brought to justice? I am afraid not, for all the officials were leagued against the noble senator,