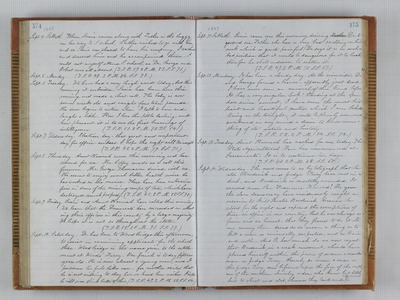 1859. Sept. 4. Sabbath. When Susie came along with Father in the buggy on her way to S. school, Luther wished to go with her, and as Susie was pleased to have his company, I washed and dressed him and he accompanied them. I could not myself attend S. school, as Dr. George and Robert were all absent. (T.S.R. 59. 2 P.M. 83. S.S. 71.) Sept. 5. Monday. (T.S.R. 48. 2 P.M. 84. S.S. 73.) Sept. 6. Tuesday. We have had a very high wind today, but this evening it subsides. Susie has been here this evening, and made a short call. The baby is now seven weeks old and weighs fourteen pounds. He now begins to notice when I talk to him and laughs a little. How I love the little darling, and how pleasant it is to see the first beamings of intelligence. (T.S.R. 51. 2 P.M. 78. S.S. 64.) Sept. 7. Wednesday. Election day - that great and important day for office - seekers. I hope the right will triumph. (T.S.R. 45. 2 P.M. 79. S.S. 71.) Sept. 8. Thursday. Aunt Hannah came this morning and has ironed for me. Mr. Coffey made us a call this forenoon. Mr. George Thomason dined with us. He seems to enjoy much better health since he has worked in the mince. There have been extensive fires in some of the mining camps of late, which have destroyed much property. (T.S.R. 45. 2 P.M. 88. S.S. 78.) Sept. 9. Friday. Susie and Aunt Hannah have called this evening. We learn that the Democrats have succeeded in electing their officers in this country by a large majority. We hope it is not so through out the state. (T.S.R. 50. 2 P.M. 91. S.S. 79.) Sept. 10. Saturday. Dr. has been to Wood bridge this afternoon, to assist in examining applicants for the school there. Wood bridge is the name given to the settlement at Woods' Ferry. Bro. Josiah is today fifteen years old. He is now almost a young man, and I presume he feels like one, for mother writes that he is not willing to obey her or heed her wishes. I hope he will soon think better of this. (T.S.R. 49. 2 P.M. 82. S.S. 64.) 1859. Sept. 11. Sabbath. Susie came over this morning, desiring Dr. to go and see Father who has a very bad swelling on his neck which is quite painful. Dr. says it is in such a bad position that it would be dangerous for it to break, there fore he shall endeavor to scatter it. (T.S.R. 47. 2 P.M. 78. S.S. 67.) Sept. 12. Monday. It has been a cloudy day. At the river ride, Dr. and George found a beaver, apparently just dead. I have never seen an animal of this kind before. It has a very singular look. Standing at the open door since sunset, I have seen the most brilliant and beautiful meteor which I ever beheld. Being in the twilight, it could be plainly seen, and awakened in my mind a desire to know something of its nature and history. (T.S.R. 52. 2 P.M. 84. S.S. 72.) Sept. 13. Tuesday. Aunt Hannah has washed for me today. The State Agricultural Fain has commenced at Sacramento. It is to continue ten days. (T.S.R. 48. 2 P.M. 82. S.S. 68.) Sept. 14. Wednesday. The news comes to us by late graph that Senator Broderick and Judge Terry have met in a duel, and Broderick is mortally wounded. It occurred near San Francisco. How sad! For years the slave democracy have assiduously sought an occasion to kill Senator Broderick because he stood for the right and exposed the corruptions of those in office in our country, but he was always so firm and so honest, that they feared to do it. No one among them dared do so mean a thing as to kill a man so universally respected, and so brave and noble. And O, how much do we now regret that Broderick, in a weak moment, should have placed himself within the power of so sure a marksman as Judge Terry. Scarcely so mean a man as this Judge Terry can be found upon the face of the earth one of the son them chivalry order, who know but little but to shoot and stab, whenever they lack words for argument.