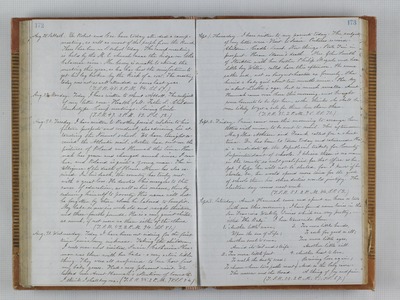 Aug. 28. Sabbath. Dr. Robert and Geo. have today attended a camp-meeting, as well as most of the people from the Ranch. There has been no S. school today. The camp meeting is held by the M. E. church near the bridge on the Calaveras river. Mr. Curry is unable to attend the meeting this year, as he has had the misfortune to get his leg broken by the kick of a cow. The meeting today was not as well attended as some last year. (T.S.R. 48. 2 P.M. 84. S.S. 69.) Aug. 29. Monday. Today I have written to Aunt Abbott. The subjects of my letter were - Health of all - Father L. - Children. Ambrotype – Camp-meetings - Sewing Circle. (T.S.R. 49. 2 P.M. 83. S.S. 72.) Aug. 30. Tuesday. I have written to Brother Josiah relative to his future prospects and conduct, also advising his attending the Normal school. We have tonight received the Atlantic mail. Mother has sent us the pictures of Roland and Hannah this time. Hannah has grown and changed much since I saw her, and Roland is quite a young man. The intelligence of the death of Horace Mann has also arrived. In his death, the country has truly met with a great loss. He devoted his energies to the cause of education, as well as his means, there by reducing himself to poverty. His name will not be forgotten by those whom he labored to benefit. My babe is now six weeks old and weighs thirteen and three fourths pounds. He is a very quiet child, as much, if not more so than either of the others. (T.S.R. 53. 2 P.M. 94. S.S. 81.) Aug. 31. Wednesday. Today I have been out riding for the first time since my sickness. Taking the children, I rode over and visited Susie. Catharine Sherman was there with her babe - a very active little thing. They were all surprised to see how fast my baby grows. Had a very pleasant visit. We looked over Aunt Hannah's collection of bonnets. I think I shall buy one. (T.S.R. 55. 2 P.M. 98. S.S. 84.) Sept. 1. Thursday. I have written to my parents today. The subjects of my letter were - Visit to Susie - Pictures received - Children - Cradle - Lamb - New things - I late Fair in prospect - Horace Mann's death. Mrs. John Smith of Stockton with her brother Philip Megerle and her little boy Willie, called here this afternoon. She seems rather sad, not so buoyant hearted as formerly. she buried a baby girl about ten months since. Her boy is about Luther's age, but is much smaller. Aunt Hannah came over here this morning, and brought some bonnets to be left here, as she thinks she shall be more likely to get a sale for them here than there. (T.S.R. 55. 2 P.M. 96. S.S. 70.) Sept. 2. Friday. Susie came over this morning to arrange her letters with mine, to be sent to mail. This afternoon, Mr. & Mrs. Athearn and Frank called for a short time. Dr. has been to town today and returned. He is a candidate on the Republican ticket, for County Superintendant of schools. I believe there is no more in the county so well qualified for that office as he, yet I hope he will not be elected, for I know if he should be, he would spend more time for the good of schools than his other duties would justify. The election day comes next week. (T.S.R. 51. 2 P.M. 84. S.S. 63.) Sept. 3. Saturday. Aunt Hannah came and spent an hour or two with me this morning. I have found some lines in the San Francisco Weekly Times which are very pretty, entitled "The Baby. I here transcribe them. 1. "Another little wave, Upon the sea of Life; Another soul to save, Amid its toil and strife. 2. Two more little feet To walk the dusty road; To choose where two paths meet The narrow and the broad. 3. Two more little hands, To work for good or ill; Two more little eyes, Another little will. 4. Another heart to love, Receiving love again; And so the baby came. A thing of joy and pain." (T.S.R. 50. 2 P.M. 81. S.S. 67.)