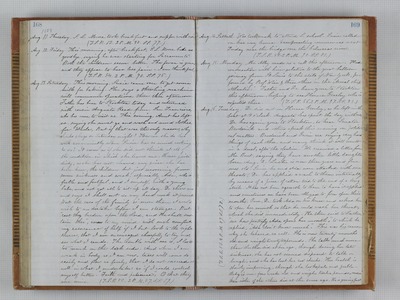 1859 Aug. 11. Thursday. S. L. Moore took breakfast and supper with us. (T.S.R. 52. 2 P.M. 88. S.S. 77.) Aug. 12. Friday. This morning, after breakfast, S. L. Moore bade us goodbye, saying he was starting for Sacramento. Both the children seem better. The fever is gone, and they appear to have less pain. I am thankful. (T.S.R. 54. 2 P.M. 90. S.S. 75.) Aug. 13. Saturday. This morning, Susie came over to get some milk for baking. She says a threshing machine will commence operations there this afternoon. Father has been to Stockton today and returned with cousin Augusta Read from San Francisco, who has come to visit us. This evening, Aunt has left us, saying she must go and wash and mend clothes for Uncle, But if that was the only reason, why should she go on Saturday night? How can she do her work conveniently when Susie has so much cooking to do? It seems as if she did not think at all of the condition in which she leaves me. House quite dirty, as she has not cleaned any since she has been here, the children but just recovering from severe sickness and weak, especially Ada, who is feeble and fretful, and I myself, with a young babe, and not yet able to sit up all day. Dr. cheers me and says I shall not do any hard work at present. But the care of the family is more than I would wish to undertake before I am stronger. But "cast they burden upon the Lord, and He shall sustainthee," come to my mind with such comforting assurance of help if I beet look to the right source, that I am encouraged cheerfully to try and see what I can do. The trouble with me is, I look too much on the dark side. And when I am weak in body as I am now, tears will come so easily and flow so freely, that I do not succeed so well in what I undertake as if I could control myself better. "Faith and patience," O that they were mine. (T.S.R. 50. 2 P.M. 87. S.S. 69.) Aug. 14. Sabbath. Was took weak to attend S. school. Susie called on had way home. Campmeeting commences next Friday near the bridge over the Calaveras river. (T.S.R. 52. 2 P.M. 90. S.S. 81.) Aug. 15. Monday. Mr. Alley made us a call this afternoon. Had conversation with him relative to the great balloon journey from St. Louis to the state of New York, performed by Prof. Wise & three others in the "Aerial ship Atlantic." Father and Dr. have gone to Stockton this afternoon, hoping to see Horace Greeley who is expected there. (T.S.R. 56. 2 P.M. 97. S.S. 81.) Aug. 16. Tuesday. Dr. did not see Horace Greeley, as he left in the boat at 4 o'clock. Augusta has spent the day with me, Dr. has again gone to Stockton, to hear Senator Broderick and others speak this evening on political matters. Broderick and Gwin are saying very hard things of each other, and many think it will result in a duel, after the election. We received a letter from Mr. Burt, saying they have another little daughter born Aug. 2. Luther is now three years and four mos. old. Since he and Ada were attacked with sore throats, Dr. has applied a wash to them internally by means of a piece of cotton tied to the end of a long stick. It has not been agreeable to them to have it applied and sometimes we have been obliged to force open their mouths. Once, Dr. took Ada on his knee and asked her to open her mouth so that he could wash her throat, which she did immediately. He then said to Luther, see how prettify Ada opens her mouth, to which he replied, "Ada don't know much." This was his reason why she behaved so well. She is now twenty months old and weighs twenty two pounds. She talks much more than Luther did at her age, though during her late sickness, she has not seemed disposed to talk or laugh, and she has lost her red checks. Her health is slowly improving, though she looks pale and feeble. Baby is now four weeks old and weighs twelve pounds, more than either of the others did at the same age. He is growing fast. (T.S.R. 53. 2 P.M. 89. S.S. 73.)