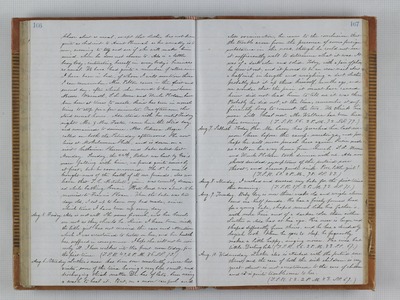 behave about as usual, except that Luther has not been quite as obedient to Aunt Hannah as he usually is to me, seeming to try and see if she will make him mind. when he does not choose to. Ada is a little busy body, interesting herself in everybody's business as usual. We have had quite a number of callers since I have been in bed, of whom I will mention those I can remember. Mrs. Pelton came in the first and Second day, after which she moved to her new house. Messrs. Wurmoth, S. L. Moore and Uncle Holden have been here at times to meals. Susie has been in several times to stop for a few minutes. One afternoon, she staid several hours. Ada staid with her until Friday night. Mr. & Mrs. Foster. came here the third day, and remained to dinner. Mrs. Rebecca Magre called on both the Saturday afternoons. She now lives at Mokelumne Hill, and is down on a visit. Catharine Sherman and babe called last Monday. Sunday, the 24th, Robert was hurt by Geo.'s mare falling with him, we feared quite seriously at first, but he soon recovered. The N. E. mail brought news of the health of all our friends, also we learn that T. C. Mitchell, jim. was recently drowned while bathing. Cousin Hate Reed was about to be married to Francis Sloan. When the babe was ten days old, I sat up to have my bed made, since which time I have been up every day. Aug. 5. Friday. Ada is not well. She seems feverish, and her bowels are not as they should be. Since I have been sick, the little girl has not received the care and attention which I was accustomed to bestow on her, and her health has suffered in consequence. I hope she will not be seriously ill. I have walked into the front room today, for the first time. (T.S. R. 49. 2 P.M. 86. S.S. 73.) Aug. 6. Saturday. Luther's nose has been sore constantly since last winter, some of the time having a very bad smell, and discharging trick matter. Dr. has of late, been using a wash to heal it. But, on a more careful and close examination, he came to the conclusion that the trouble arose from the presence of some foreign substance in the nose, though he could not see it sufficiently well to determine what it was. It was of a dark color and solid. Today, with a pair of plies he drew it out, and it proved to be an iron nail about a half inch in length and weighing a duct. Luther probably put it up there himself, months ago, and we wonder that the pain it must have caused him did not lead him to tell us it was there. Probably he did not, at the time, remember it sufficiently long to connect the two. We think his nose will heal now. Mr. Wallace has been here this evening. (T.S. R. 56. 2 P.M. 92. S.S. 79.) Aug. 7. Sabbath. Today Rev. Mr. Curry has preached his last sermon here before the camp-meetings, and perhaps he will never preach here again. Susie made us a call on her way home from church. S. L. Moore and Uncle Holden took dinner with us. Ada now shows decided symptoms of the putrid sore throat, and seems quite sick. Poor little girl! (T.S. R. 60. 2 P.M. 98. S.S. 83.) Aug. 8. Monday. I washed and dressed my babe for the first time this morning. (T.S. R. 57. 2 P.M. 93. S.S. 71.) Aug. 9. Tuesday. Baby boy is now three weeks old and weighs eleven and one-half pounds. He has a finely-formed head for a young babe, shaped much like his father's, with more hair and of a darker color than either Luther or Ada had at his age. His nose is larger and shaped differently from theirs, and he has a decidedly boyish look. When he goes to sleep, he frequently makes a little happy, singing noise. He cries but little. Darling babe! (T.S. R. 55. 2 P.M. 83. S.S. 67.) Aug. 10. Wednesday. Luther also is attacked with the putrid sore throat, and the care of both the sick children is very great. Aunt is not accustomed to the care of children and it is quite troublesome to her. (T.S. R. 52. 2 P.M. 83. S.S. 69.)