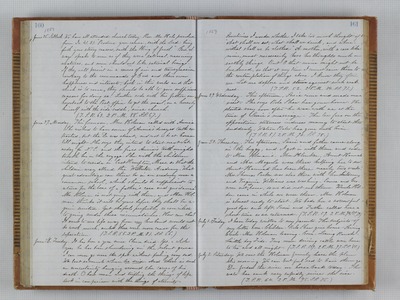 1859. June 26. Sabbath. We have all attended church today. Rev. Mr. Hole preached from Is. 41. 21. "Produce your cause, saith the Lord; bring forth your strong reasons, saith the King of Jacob." God always speaks to men as if they were rational, reasoning creatures, and men should act like rational beings. If they will persist in a course of sin and transgression contrary to the commands of God and their own happiness and interests, both in this world and that which is to come, they should be able to give sufficient reasons for doing so. Luther rode with his father on horseback to the Post office to get the mail, on a horse by himself with the side saddle, since church. (T.S.R. 62. 2 P.M. 88. S.S. 67.) June 27. Monday. This forenoon, Mrs. Holman called with Annie. She wished to ham some of Annie's decayed teeth extracted, but the Dr. was absent, and not to be at home till night. She says they intend to start next Saturday for N. E. and she fears Annie's teeth night trouble her on the voyage. She with the children intend to reside in East Hampton, Mass. so that the children may attend the Williston Academy. What great advantage can there be in an academy over a common school, which should be sufficient to atone for the loss of a father's care and guidance? Mr. Holman is not going with them, and Mrs. Holman thinks it will be years before they shall be again united. Yet she feels perfectly reconciled to going under these circumstances. How can she? It seems to me life away from my husband would not be worth much, unless there were more cause for the separation. (T.S.R. 55. 2 P.M. 81. S.S. 66.) June 28. Tuesday. It has been a year since Elmer died. Yes. a whole year he has been slumbering in the silent grave. I can never go near the spot without feeling very sad. We lost so much when he died. And there is such an uncertainly hanging around the cause of his death. O how mean and trifling the things of life look in comparison with the things of eternity. 1859. Sometimes I wonder whether I take too much thought of "what shall we sat, what shall we drink, and wherewithal shall we be clothed." A mother, with a care like mine, must necessarily have her thoughts much on earthly things. But O that mine might not be burdened, so that at any time I cannot raise them to the contemplation of things above. I know they often are. Let me deplore and strive against such weakness. (T.S.R. 52. 2 P.M. 84. S.S. 71.) June 29. Wednesday. This afternoon, Susie came and made me a visit. She says Bela Shaw has gone home. He started very soon after he was with as at the time of Susie's marriage. The low fare on the opposition steamers induces many to start thus suddenly. Watson Bates has gone with him. (T.S.R. 51. 2 P.M. 90. S.S. 78.) June 30. Thursday. This afternoon. Susie and father came along in the buggy, and I got in with them and rode to Mrs. Holman's. Mrs. Klouker, Aunt Hannah and Mrs. Megerle were there helping her to sew Aunt Hannah has been there nearly two weeks! Mrs. Thomas Parker was also there with her children, and Virginia Williams was washing, Emma and Geo. were not at home, so we did not see them. Uncle Holden came in while we were there. Mrs. Holman is almost ready to start. We bade her a sorrowful goodbye and left. Susie and Father called here a short time as we returned. (T.S.R. 59. 2 P.M. 92. S.S. 79.) July 1. Friday. I have today written to my parents. The subjects of my letter were - Children - Bela Shaw gone home Sewing Circle - Mrs. Holman leaving - Corn. Losing Ranch - Little dog Fids. Two men driving cattle were here to tea and all night. (T.S.R. 59. 2 P.M. 97. S.S. 83.) July 2. Saturday. We saw the Holman family leave the place this morning. We can but feel sad to have them go. Dr. forded the river on horse back today. The water has sunk very rapidly since the rise. (T.S.R. 64. 2 P.M. 95. S.S. 76.)