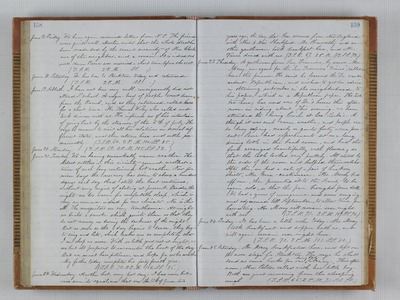 June 17. Friday. We have again received letters from N. E. The friends were quite well. Mother writes that the whole street has been made sad by the recent insanity of Mrs. Clark, one of the neighbors, and a cousin. It is indeed sad news. Anna Pierre was married a short time before she wrote. (T.S.R. 2 P.M. S.S. ) June 18. Saturday. Dr. has been to Stockton today and returned. (T.S.R. 2 P.M. S.S. ) June 19. Sabbath. I have not been very well, consequently did not attend S. school. A wagon - load of people went down from the Ranch, and as they returned, called here for a short time. Mr. Thomas Wiley also called and took dinner with us. He informs us of his intention of going East by the steamer of the 5th of July. He says he means to visit all his relatives in several different states, and then return here and settle permanently. (T.S.R. 64. 2 P.M. 110. S.S. 85.) June 20. Monday. (T.S.R. 63. 2 P.M. 105. S.S. 92.) June 21. Tuesday. We are having remarkably warm weather. The oldest settlers in this vicinity cannot recollect a time of such long continued hot weather. Now for seven days the mercury has risen to above a hundred degrees each day. And still the heat continues, without any signs of abating at present. Besides, the nights are too warm for comfortable sleep, which is very uncommon indeed for our climate. Nor is this all. The mosquitoes are very troublesome. At night we build a smoke which quiets them so that they do not annoy us during the darkness of the night. But as soon as the day begins to dawn, they begin to sing and bite, which wakes me so completely that I can sleep no more. With so little good rest at night, we are but ill prepared to encounter the heat of the day. But we must have patience, and hope for cooler weather. My father today completes his forty fourth years. (T.S.R. 70. 2 P.M. 108. S.S. 86.) June 22. Wednesday. Another hot, very hot day. I have never but once seen its equal, and that was the 17th of June, two years ago, the day that Geo. arrived from New England with Mrs. & Miss Shackford. Mr. Kenworthy and another gentleman took breakfast here, and Mr. Vance dined with us. (T.S.R. 67. 2 P.M. 112. S.S. 92.) June 23. Thursday. A gentleman from San Francisco, by name Mr. Morey, an agent for the "San Francisco Times," called here this forenoon. He said he learned the Dr. was an ardent Republican, and wished to get his advice in obtaining subscribers in the neighborhood, to his paper, which is a Republican paper. He took tea here, has used one of Dr.'s horses this afternoon in riding about. This evening, we have attended the Sewing Circle at Geo. Locke's. Although it was such warm weather, and people are so busy reaping, nearly or quite forty were present. Susie had refreshments set on a long dining table in the back room, and had the food arranged beautifully with flowers, so that the table looked very prettily. All stood by the rides of the room and helped themselves. After this, we had a sale of a pair of hickory shirts, Mr. Green - auctioneer Mr. Morey bed off one, then presented it to the Society to be again sold, so that the pair brought four dolls. We had a game of consequence and some singing, and adjourned till September, to allow time for harvesting. Mr. Morey will remain over night with us. (T.S.R. 71. 2 P.M. 109. S.S. 90.) June 24. Friday. It has been a little cooler today. Mr. Morey took breakfast and supper with us, and will again remain over night here. (T.S.R. 70. 2 P.M. 101. S.S. 80.) June 25. Saturday. Mr. Morey breakfasted here, and left on the noon stage for Stockton. He says he shall send us some books for our Sewing Circle library. This afternoon Mrs. Pelton called with her little boy. Both are just recovering from the whooping cough. (T.S.R. 65. 2 P.M. 91. S.S. 75.)