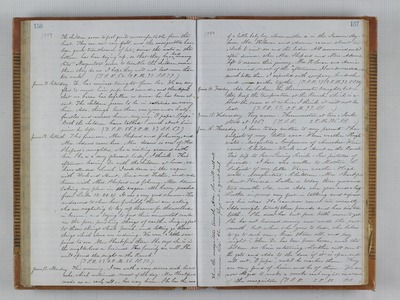 1859. The children seem to feel quite uncomfortable from the heat. They are not very well, and the mosquitoes have been quite troublesome of late, since the water in the bottom has been drying up, so that they have had many bites. Mosquitoes seem to trouble the children more than they do us. I hope they will not last more than two weeks. (T.S.R. 60. 2 P.M. 93. S.S. 79.) June 11. Saturday. Dr. has arrived tonight from Sac. We are very glad to meet him safe and sound, and thankful that no harm has befallen us since he has been absent. The children seem to be in ecstasies on seeing him. Ada, though less than one year and a half, fondles and caresses him, saying, "O papa, O papa". Both the children have talked much about him since he left. (T.S.R. 58. 2 P.M. 87. S.S. 67.) June 12. Sabbath. This forenoon, Mrs. Shepard and Johnny, and Mrs. Adams came here. Mrs. Adams is one of Mrs. Shepard's neighbors, who is visiting around with her. She is a very pleasant lady, I think. This afternoon, leaving Dr. with the children at home, we have attended church. I rode down in the wagon with, Uncle and Aunt, Susie and Father, and rode home with Mrs. Shepard and Johnny, Mrs. Adams taking my place in the wagon. Mr. Curry preached from Luke 12. 20. 21. It was a very good sermon. He endeavored to show how foolishly those are acting who are neglecting to lay up treasure for themselves in heaven, and trying to feed their immortal souls on the poor, perishing things of earth - clinging fast to those things which perish, and letting go those things which alone are enduring. We were a little surprised to see Mrs. Shackford there. She says she is in the neighborhood on business. Her family are well. She will spend the night on the Ranch. (T.S.R. 53. 2 P.M. 86. S.S. 75.) June 13. Monday. This morning, I rose with a very severe sick headache, which continued most of the day. Mrs. Shackford made us an early call on her way home. She has the care 1859. of a little baby boy, whose mother is in the Insane Asylum. Mrs. Holman and Annie came about ten o'clock to visit me and the ladies. All remained until after dinner, when Mrs. Shepard and Mrs. Adams left to resume their journey. Mrs. Holman and Annie remained most of the afternoon. I have succeeded much better than I expected with company, headache and warm weather together. (T.S.R. 57. 2 P.M. 93. S.S. 80.) June 14. Tuesday. Ada has broken the thermometer tonight, but as they keep the temperature at the Ranch, which is about the same as it is here, I think it will not be lost. (T.S.R. 61. 2 P.M. 97. S.S. .) June 15. Wednesday. Very warm. Thermometer at two o'clock stood at 106º. (T.S.R. 2 P.M. 106. S.S. .) June 16. Thursday. I have today written to my parents. The subjects of my letter were - Warm weather - High water - Mosquitoes - Conference of churches - Wire covers - Children - Uncle and Aunt on the Ranch Dr.'s trip to Sac. Sewing Circle - Saw pictures of friends. I have also written to Mother L. Subjects of my letter - Warm weather - High water - Mosquitoes - Children - Mrs. Shackford Aunt Howard. Luther is today three years and two months old, and Ada one year and a hag. Luther improves very fast in talking and expressing his ideas. He can now count ten correctly. Ada weighs twenty three pounds and has sixteen teeth. She now has but four teeth more to get. She has not learned many new words the past month, but when she goes to bed, she likes to go to each one, kiss them all, and say night. When Dr. has been from home, and the children see him returning, Luther will run to the gate and Ada to the door if it is open, and call out, "O papa", until he reaches them. They are very fond of him, and he of them. We are now obliged to make a smoke each night, on account of the mosquitoes. (T.S.R. 2 P.M. S.S. .) When the mosquitoes trouble Ada. She will call out, “Mamma, bite.” She now plays out a great deal.