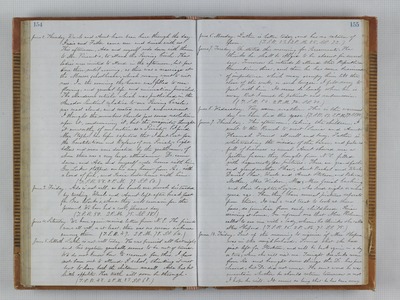 June 2. Thursday. Uncle and Aunt have been here through the day. Susie and Father came over and dined with us. This afternoon, Ada and myself rode down with them to Mr. Vincent's, to attend the Sewing Circle. The Ladies were invited to attend in the afternoon, but few were there until evening, as there was a marriage at the Monroe schoolhouse, which many went to witness. In the evening the house was filled to overflowing, and general life and animation prevailed. The slanderous article which was published in the Amador Sentinel relative to our Sewing Circle, was read aloud, and created much amusement. I thought the members should pass some resolution upon it, condemning it, but the majority thought it unworthy of our notice as a Society. I find Mrs. Staples has before reported that I sent East for the Constitution and Bylaws of our Society. Eight dollars and more were donated by the gentlemen, of whom there was a very large attendance. Dr. came down, and Ada and myself rode home with him. Geo. Locke stopped on his way home from Sac. with a load of fish, and Susie rode home with him. (T.S.R. 58. 2 P.M. 79. S.S. 60.) June 3. Friday. Ada is not well, as her bowels are much disturbed by teething. Uncle and Aunt left after breakfast for Geo. Locke's, where they will remain for the present. We have had a cool, pleasant day. (T.S.R. 50. 2 P.M. 75. S.S. 58.) June 4. Saturday. We have again received letters from N. E. The friends were all well, or at least, there was no serious sickness among them. (T.S.R. 49. 2 P.M. 78. S.S. 64.) June 5. Sabbath. Luther is not well today. He was feverish all last night, and his system generally seems to be out of tune. We do not know how to account for this. I have not been out to Mend S. school, thinking it not best to leave both the children unwell. Ada has but little appetite. Her teeth will soon be through. (T.S.R. 48. 2 P.M. 83. S.S. 68.) June 6. Monday. Luther is better today, and has no return of fever. (T.S.R. 53. 2 P.M. 85. S.S. 72.) June 7. Tuesday. Dr. started this morning for Sacraments. He thinks he shall be obliged to be absent for several days. Tomorrow he intends to attend the Republican Convention there, and then he has some business of importance which may occupy him till the close of the week, or even longer. I felt sorry to part with him. It seems to lonely when he is away. But I must be patient and submissive. (T.S.R. 50. 2 P.M. 94. S.S. 80.) June 8. Wednesday. Very warm weather. This is the warmest day we have had this year. (T.S.R. 61. 2 P.M. 99. S.S. 83.) June 9. Thursday. This afternoon, taking the children, I went to the Ranch to visit Susie and Aunt Hannah. Found all well and busy, Father is whitewashing the inside of the farm, and feels as full of business as usual. Aunt showed me a picture frame they brought from N. E. filled with daguerreotype pictures. There are grandfather and grandmother Shaw, Aunt Rachel and Uncle Daniel Shaw, Uncle and Aunt Stetson and Rebecca, Mother, Mrs. Windsor, Mr. & Mrs. Josiah Cushing and their daughter Lizzie, who died eight or nine years ago. Then they have several pictures separate from there. It was a real treat to look at those faces, so familiar from early childhood. Susie arriving at home, Geo. informs me that Mrs. Holman called to see me with a lady, whom he thinks she called Mrs. Shepard. (T.S.R. 56. 2 P.M. 91. S.S. 75.) June 10. Friday. Sent up this morning to inquire if Mrs. Shepard was in the neighborhood. Found that she had just left for Stockton, and will be back again in a day or two, when she will visit me. Tonight Geo. Locke came from Sac. and brought some things the Dr. has purchased, but Dr. did not come. He sent word he was uncertain whether he should return tomorrow or not. I hope he will. It seems so long that he has been away.